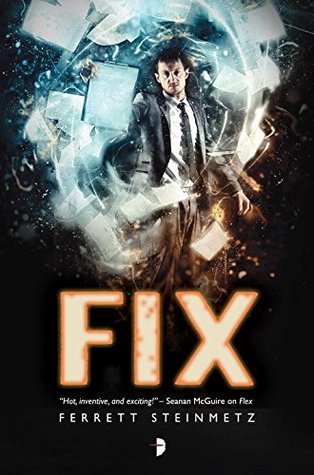 The third book in Ferrett Steinmetz’s ‘Mancy series.  I haven’t been a big fan of the first two books, but I went in to this determined to see in it what others have found so appealing.  I didn’t succeed, but I did find this book to be a tad more interesting than the other two.

‘Mancy is a magic that draws on a person’s obsession.  If you are someone who loves to play videogames, then you might become a videogamemancer like teenage Aliyah.  Make bullets bounce harmless off of you or fly or drive like someone in Grand Theft Auto.  If you are someone who likes order and paperwork, then you might be a bureaucromancer like Paul Tsabo. But possessing ‘Mancy magic comes at a price – the way any drug demands compensation for the benefits it provides.

The universe is now tearing itself apart and sending bad luck to the ‘Mancers, causing their worst nightmares to become their realities. SMASH – an organization created to fight ‘Mancers and repair their damage – had sent all their people to Europe to work on the rift. Paul, meanwhile, has settled down, hiding in a small Pennsylvania town to allow his now teenaged daughter Aliyah, the opportunity to have a normal childhood – playing soccer and making friends.  They were in hiding because:

Aliyah was the youngest ‘mancer in what remained of the world – and though he’d tried hard to convince America that he and his daughter were human beings, worthy of the Bill of Rights, he’d barely budged the needle away from “brainwash them all.”

He’s determined to no longer use ‘Mancy, which causes as much pain to him and his family as it does solve problems.

But the best laid plans…

Paul and Aliyah are discovered.  Paul and Aliyah are separated (which, as we have discovered in the previous books, will drive Paul absolutely mad and a mad ‘Mancer is dangerous.  But Aliyah is not a helpless child.  She’s now a teenager and although she still loves her father, she’s willing to stand up to him and disobey him. And because Paul loves Aliyah more than anything, he trusts her – though it takes some work to get him there.

What I liked about this book more than the others was the focus.  I can’t say that I’ve been a fan of Paul Tsabo in any of these books (which makes reading about him challenging), but I could understand his obsession and passion better in this volume.  And Aliyah, though she’s been sort of the star of the books, hasn’t been in a place to actually make decisions, despite her power and abilities.  Here she does, and she’s pretty good at it.  This helped me enjoy this book much more.

I also made a note in my Kindle edition “the government claimed Paul was dangerous but in fact they made him dangerous by fighting him.”  This is a bit simplistic, but it does seem to boil it down.

While I enjoyed this book more, I still can’t give the series a raving review.  It’s the sort of book that if someone held it up to me and asked, I’d shrug my shoulders and say, “Eh.”

There were, however, two lines that I loved (from different moments in the book):

“Oh, come on!” she screamed. “When the fuck isn’t Batman enough?”

“You’re telling me the only thing keeping the planet safe has been … good middle management?”

Looking for a good book? Fix by Ferrett Steinmetz finishes his ‘Mancy trilogy.  It is the best of the three volumes but still doesn’t have quite the impact I was hoping for.