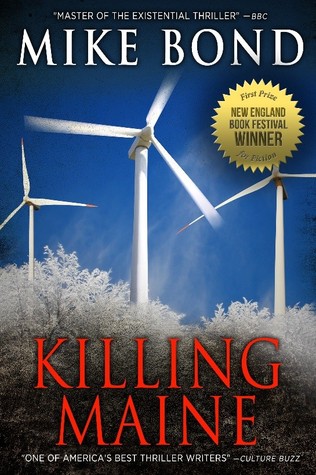 Killing Maine is the second book in the Pono Hawkins series by Mike Bond.  I reviewed the first book, Saving Paradise, here. I was a little nervous about going in to this one, given my feelings about the previous novel. Fortunately, I enjoyed this story much more.

Although Pono Hawkins embraces his life in Hawaii, when a fellow Special Forces comrade calls needing help, Pono packs up and hustles to Maine, where sub-zero temperatures will be the warmest reception he gets.   Bucky Franklin isn’t necessarily a friend – he’s the man who sent Pono to military prison – but the Special Forces bond is strong and when he’s accused of killing a local politician, Pono comes to help.

What Hawkins finds in Maine … a state with some of the most corrupt politicians in the country according to the story … is a wind-turbine industry that is forcing locals out of their homes, causing low property rates, and generating more of a cash flow to the businessmen behind the turbines than actual energy. And stepping in to the fray, finding him suddenly accused of vandalism and murder, is Pono, who’d much rather be back in Hawaii with his dying father.

I enjoyed this book much more than the previous novel.  Despite the side story of Pono’s dying father, I found this book to have a much better focus and clearer language (though there were still times that the grammar needed some stronger editing). I’m not a big fan of political thrillers and this is certainly more of a political thriller than a mystery.  Still, I found it easy to follow Pono and root for him to find success.

There is some romance but it is pretty much a failure from the get-go.  The problem here is that Pono isn’t set up to be a character that gets involved romantically, so anything along those lines is like canoeing upstream without a paddle.  You are going against type, making it more difficult for yourself before you even begin.  And then it never feels natural either.

All in all, this was a decent book with a focused story, but ‘m not going to be looking for a sequel and my only recommendation is that it’s pretty average fare.

Looking for a good book? Killing Maine by Mike Bond is pretty average fare for a political thriller.