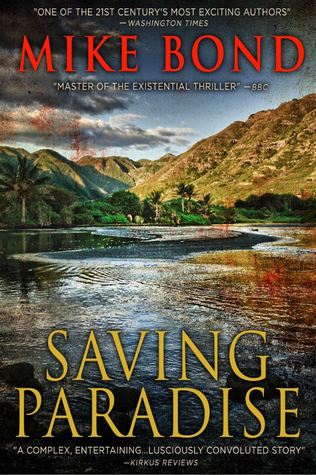 I’m getting just a little bit smarter….  I saw that an ARC book that I have in my queue is the second book in a series, so I thought I’d go and rent/borrow the first book in the series so that I wouldn’t be taken by surprise when I get to my ARC.

Pono Hawkins is a former Special Forces member and now is a renowned surfer and surfing reporter.  When a journalist drowns nearby under suspicious circumstances, Pono gets involved, but what he begins to learn puts him into a conspiratorial web with long-reaching threads and makes him a target for killers that wouldn’t hesitate to take him out.  Pono reaches out to his Special Forces comrades to protect himself and find the journalists killers.

While there is plenty of action and of course a setting that is ‘paradise’ I was unfortunately quite turned off to this book very early due to either very poor editing and/or tremendously bad grammar.  I did not start highlighting the instances right away (it’s sad, but I’ve come to expect some typos in books, especially those that are self-published or published by very small presses) but it got to be so much that I couldn’t help but start taking notes (and I couldn’t keep up with them).  And remember…this book is NOT the ARC, but the published edition. Some random highlights from my copy:

“So I explain Benny what happened.”

“I can take you there you want.”

“Next I called Kim and explained her about the Koreans…”

“You explain me everything, you live.”

Can somebody “explain me” what’s going on?  I was trying to give the author the benefit of the doubt and assume that this was some poor dialect that some of the characters were speaking, but it was just random enough to make it not seem character-specific.

I was really disappointed and now am NOT looking forward to the ARC that follows.

Looking for a good book?  This isn’t it.