A TIME OF TORMENT – John Connolly 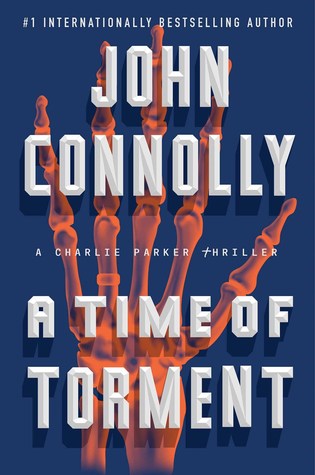 I’ve read a lot of self-published books and books by small press publishers since I started this blog and I can usually tell within the first few pages when I’m reading something by a less experienced author.  Likewise, I can often tell within a page or two when I’m in the hands of a master and such was the case with John Connolly and A Time of Torment.

The opening chapter was subtle and melodic and tremendously disturbing, giving me a chill right down to the marrow in my bones.  I was hooked and knew that this was a book I was going to enjoy.  And I was correct.

Although this is the fourteenth book in a series, it is not necessary to have read all the previous books.  The story itself is self-contained, though I suspect that we might get some character growth through the progression of the series.

Charlie Parker is a private investigator.  He is patient, methodical, and fearless. Having back-up such as Angel and Louis helps the fearlessness.

In A Time of Torment, Parker is slowly brought in to a story of kidnapping, enslavement, and murder that reaches much farther back than Parker’s involvement.  A small, isolated community known as “The Cut” exists outside the long arm of the law and is tolerated by locals because The Cut’s influence doesn’t disrupt their own daily lives.  But members of The Cut reach beyond the local community to kidnap young girls, enslaving them to become breeders for the men, and then killed after giving birth to the third or fourth child.  This has been going on for a long time, ensuring the longevity of the community.

But there is strife inside the community as the younger generation is not satisfied with the pace and direction of the current leader.  Catching Parker’s interest can not be good for a community looking to stay off the grid.

While it’s true that the readers don’t need to read the previous books in the series to follow this story, there is a sub-plot involving Parker’s daughters (one living, one dead) that likely won’t make as much sense to the new reader (such as myself). But the story here is dark and disturbing and Connolly holds the reader’s interest all the way through and builds the action, along with the story, delicately but with power – like a spider’s web.  I look forward to going back and starting this series from the beginning.

Looking for a good book? A Time of Torment by John Connolly is a powerful mystery with shades of paranormal that tantalizes and holds a reader all the way through to the very last word.

A Time of Torment