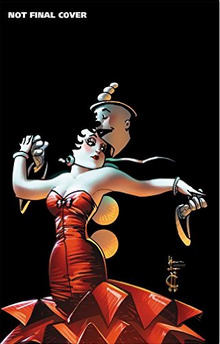 While I am familiar with the character of Betty Boop and I’ve seen pictures of some of the other characters I don’t recall ever having watched a Betty Boop film, read a Betty Boop comic strip, or listened to the Betty Boop radio show, though I’m not sure why, given my penchant for nostalgia and the jazz age.  But when I saw this graphic novel available I was eager to read it.  And I’m so glad I did.

Author Roger Langridge and artist Gisèle Lagacé have pulled off a remarkable feat – they have captured an iconic cartoon character from the 1930’s, kept the 30’s motif, along with the supernatural and otherwise bizarre elements of the early stories and still managed to make them interesting and enjoyable for the modern reader.  I absolutely loved what I found here.

Each comic issue (there are four included in this graphic novel) is a self-contained story and that story is generally pretty simple.  There are some ghosts/demons looking to take over Grandpa Boop’s house.  Each story has the demons trying a new tactic and that tactic works, if only for a little while, until Betty or one of her friends is able to sort it out and restore order.

It’s the jazz age and you can almost hear the music the way Langridge and Lagacé have put this together and recreate the songs. The leader of the band is Skat Skellington – a dashing, tux-wearing skeleton who floats over the stage with his spine draping down like a serpent’s tail.  Everyone loves Betty, but Skat’s the cat who plays like there’s no tomorrow.

Each of the characters seems to have a role to play and aren’t just there to be filler, and with the stories as simple as they are it’s impressive that these characters get a chance to show the reader (and Betty) what they’re really like.

The art is just amazing.  I really am impressed with the blending of the 1930’s style while making it artistically relevant to the modern reader.  Although Betty Boop was a black and white cartoon, there is color here in the graphic novel, but it’s subtle and muted and it still feels like that old black and white cartoon.

Am I gushing over this graphic novel?  Yes I am.  I actually liked that I could read something that wasn’t a deep, involved story.  This was entertainment with a fun-creepy aura (a skeleton band?  a clown for a friend? demons trying to take over the house?) and a little bit of adult humor to titillate (“You didn’t tell him you could suck a pineapple completely hollow, did you?”)

I want to read all the rest of the Betty Boop graphic novels (and I hope they keep putting them out) and I want to go back and watch all the old cartoons.  This was just so much fun.

Looking for a good book? Betty Boop is a graphic novel by Roger Langridge and Gisèle Lagacé that perfectly captures the feel of the 1930’s iconic comic and entertains a modern reader.  It is highly recommended.