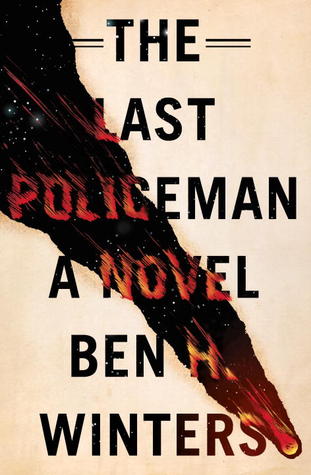 When it appears that the world will come to a screaming end very soon because of the approaching asteroid ‘2011GV1’ most of the human race gives up.  Sometimes this is through quitting jobs, or taking in one’s bucket list, and sometimes it through suicide.  In fact there are so many suicides that Detective Hank Palace shouldn’t think twice about the latest hanging in the bathroom of a local business.  But Palace does think twice and he’s still committed to doing his job – which makes him a bit of an oddity right now.

Palace is sure there’s a problem with this latest suicide, but he has nothing concrete.  Even the initial autopsy report logs this in as a suicide.  But Palace pushes back against all the evidence, convinced that there’s something amiss.  The biggest problem that Palace faces is apathy – no one cares to put much effort into doing a job, especially researching what on the surface is an obvious suicide.

The book reads like a classic ‘noir’ detective story but in the slight future.  As such, it moves a little slowly with a lot of commentary on what’s happening around Palace.  This ‘voice’ can be interesting, and we certainly get a good feel for Hank Palace and we appreciate his dedication.  But we also spend too much time being told and shown that no one else seems to care —  that Palace is working alone.  Most readers will get this early on and not need the constant reminders.

And as for Palace’s dedication … this is admirable, but … Is Palace dedicated to being a detective, no matter what, or is he simply living out his bucket-list dream, like so many other people.  He always wanted to be a detective and now he is.  Is his motivation really for doing what’s ‘right’ or simply for ego satisfaction?  Perhaps more of this become clear in the other books in the series.  I’d be interested is reading them based mostly on this fascinating world and with the hope of answering some questions I have.

Looking for a good book? The Last Policeman by Ben H. Winters is a pre-apocalyptic noir mystery that promises some interesting stories, though this particular book is generally ‘average’ at best.