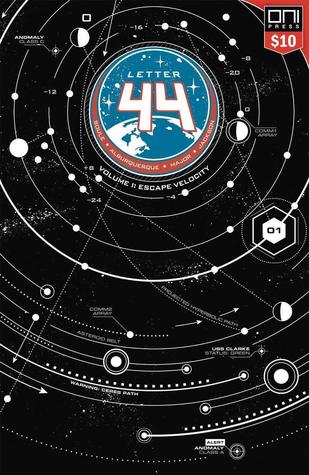 There are two main stories going on in the graphic novel, Letter 44.  They intertwine and they parallel nicely.

One story is about Stephen Blades who has just been sworn in as the new President of the United States.  He’s a no-nonsense guy who is ready to roll up his sleeves and get to work in a country that is currently in two wars and has an economy on the verge of collapse.  But as he enters the office on his first day he is presented with a letter from the previous, 44th, President.  In the letter, Blades learns that almost seven years prior, NASA discovered an alien presence in a near-by (relatively speaking) asteroid belt.  A ship with a nine-person crew was launched to investigate, though the news of the alien and the launch were never made public.

Though news of this alien life and the heroic crew investigating the aliens changes Blades’ thoughts on what requires his attention most, there are still local activities that require executive decisions and oversight.  Meanwhile, the astronauts have their own concerns.  Finding and then contacting the alien life is only a minor problem for a team in a ship needing constant maintenance, while on a one-way trip with the female commander now expecting a child.

There is a lot going on this story … a LOT.  But author Charles Soule handles the various stories and sub-plots with an enviable ease.  Each scene is kept brief and moves the story forward just as a well-written story should.  It seems surprising to actually comment on this, but there are so many stories I’ve read that don’t seem to understand this.  Too often we spend a lot of time getting to know the characters or the world that the story is set in.  Soule delivers the story and through it, we get to know the characters and all we need to know about this world that has a President Blades.

The art is good – not excellent, but it generally serves the story well.  There were panels (not entire pages at least) that made me pause and try to understand/decipher the picture or who it was that was depicted.  The style is a slightly stylized realistic.  Not quite as stylized as some I’ve seen recently (Demon, or Warship Jolly Roger) but not as realistic as the Dresden File graphic novels either.

I got sucked into the story pretty quickly and the pace and the story-building kept me there.  The art held its own, but it truly is the story that made this piece work.

Looking for a good book? Letter 44 is a graphic novel with roots in the earth but which reaches out to the stars.  It is compelling and exciting and an excellent read.