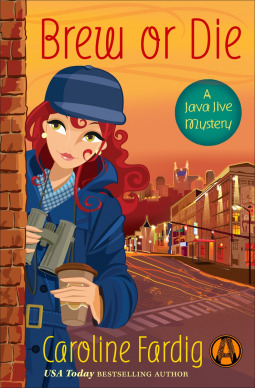 My favorite coffeehouse barista, Juliet Langley, is back in action in Caroline Fardig’s Brew or Die.

But Juliet is no longer just a coffeehouse manager who stumbles onto crime and sleuthing – now the red-head is an officially licensed private investigator in Nashville.  This makes perfect sense in the chronology of the character through the books, but it does take away a little bit of the fun.

The fiancée of one of Juliet’s Java Jive employees has died of an apparent overdose.  But the employee (Shane) is convinced that there’s foul play and talks newly licensed Juliet to investigate. Juliet (“Jules”) is also working some other cases with her friend Maya.  Those cases have her working undercover after hours as a member of a late-night cleaning crew. Somehow she also still manages Java Jive as well.

In addition to the P.I. work and the coffee-house, Jules finds time to pursue some extra-curricular activities with her boy-friend John Stafford – a police detective whom she now works with in her capacity as a private investigator.  But Juliet’s former boyfriend, Ryder, keeps trying to warn Jules about Stafford.

One of the big attractions I’ve had with this series to date is the character of Juliet.  She’s spunky with a charming innocence about her.  Even with all the dead bodies she’s had at her feet she’s maintained an energetic, can-do spirit.  But now, with her PI license comes a more stalwart and steady Jules – someone who doesn’t jump without looking.  This is more responsible on her part, but less fun for the reader.

Clearly the character is growing and with the change comes some growing pains.  This is my least favorite book in the series but I’m far from giving up on the character or the series.  I’m happy to keep going and see what other changes are in store.

The mysteries are getting stronger, and Juliet now has the opportunity to legitimately get involved in more cases, but I hope author Fardig doesn’t lose sight of Juliet, who is the real reason we read the books.

Looking for a good book? Brew or Die is the newest book in the Java Jive series by Caroline Fardig. It is not quite as strong as the previous books in the series, but it’s still a worthwhile read.