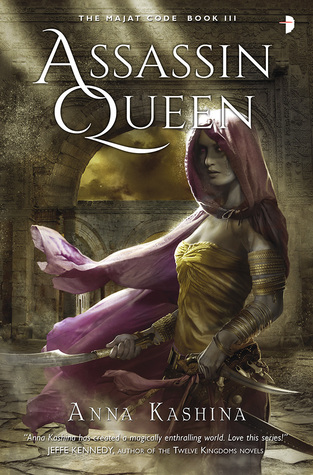 Mai has become the new Majat Guildmaster.  After the Majat victory against the Kaddim, Mai plans to follow the Kaddim to their camp to finish them.  Kara is a Diamond Majat – one of the best warriors ever.  Kara and Mai are deeply in love but protocol between a Guildmaster and a Majat is strict regarding what they are permitted to do.  But right now Kara has another problem… during the combat, one of the Kaddim placed a ‘mark’ on Kara allowing him to affect her fighting prowess and listen in to what Kara hears. The one person who can help Kara also has feelings for her and helping her would help his rival, Mai.

I read the first two books in this series (see the review for book one here, and book two here) and started out really enjoying these characters and this world.  But the second book took a turn and was as much about the romance dance between our main characters as it was about the skills of the Majat.  But there was still some wicked scenes of combat that were really exciting and kept the book flowing.  But I could sense the change.

And now the change is even more obvious. This book becomes much more of a romance than an epic fantasy story.

My biggest issue with this change is the change in characterization.  Kara, our main protagonist (alongside Mai) becomes more of a teenage girl with desires and faults than the supremely trained warrior that first fought alongside Mai.

This first became obvious when the Kaddim ability to infiltrate Kara’s thinking interrupted her during a fight.  She says, to herself, “It’s the Kaddim. They can disable me in a fight. There was no way in hell she was going to say this out loud. If she did, it would make it all true.” But most of the fights hinge on Kara and prowess.  Rather than being the leader that she has been through the two previous books, she jeopardizes the entire Majat forces because of her pride.

A whole section of the book revolves around a meeting with another group whom the Majat hopes to join forces with to defeat the Kaddim.  This group, led by women, require a ‘swapping’ of people for sexual gratification.  This alone felt like a throwback to John Norman’s “Gor” series, though with the roles lightly reversed.  Nothing is explicit, but the dance around the connubial relations is obvious.  Certainly obvious enough to make the warrior Kara blush:

Kara averted her gaze.  She knew she should be used to women ogling Mai by now, but the idea that he would be propositioned by women used to getting what they want and not in the least bit shy about it still did not sit well with her.

Ulhari turned to Kara. “You’ve been intimate with the Majat Guildmaster?”
“Yes.” Try as she might, Kara couldn’t help the blush that rose to her cheeks.
“Did you enjoy it?”
“I did.” Kara felt hot now, despite the cool evening wind wafting through the tent.
Ulhari leaned forward and patted her arm. “Good for you. Things like this make me wish I was younger, still able to chase after men I took fancy to.”

Although I was hesitant to begin the series, I found that I really enjoyed the first book and looked forward to reading the series.  But I grew disappointed with the turn the series took (at least the turn I observed) and I end the trilogy feeling betrayed.  I was not expecting to read a YA romance/fantasy, but that’s what I got.

Looking for a good book? Assassin Queen is the third book in the Majat Code series by Anna Kashina and is much more a YA romance than an epic fantasy that the first book set up.