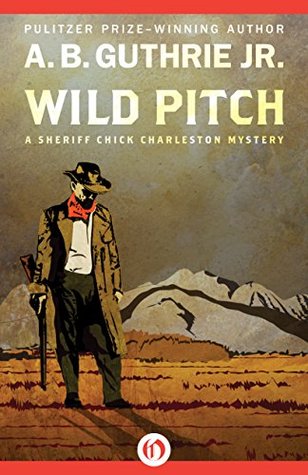 When we typically think of ‘western’ fiction, we’re imagining cowboy and wandering soldiers in the 1800’s, exploring a vast, largely unexplored wilderness west of the Mississippi River.  A.B. Guthrie Jr.’s Wild Pitch is less a western than it is a mystery set in the American Southwest.

I was not aware of the time frame until I ran across in which someone was “led out to his car, which was his own (not the county’s) and brought him maybe enough money in mileage for operation and maintenance.” Huh?  Someone drives a gas-fueled automobile in the old west?  Oh…so it ISN’T the old west… It definitely took me a bit to overcome this expectation.

Sheriff Chick Charleston is a quiet man working in a remote wilderness setting, so when a local curmudgeon is shot during a nighttime picnic, it’s business as ‘unusual’ for him. Buster Hogue has no shortage of people who would want to see him dead, so Chick’s list of suspects is plenty long, even for such a small community.

The story is told from the viewpoint of seventeen-year-old Jason Beard who works part-time for Chick.  It’s a really interesting concept and allows for some unique observations and theories that, coming from a young man, aren’t always accurate.

I was reminded of Sheriff Longmire (a series I only recently discovered), though Chick appears a little more laid back than Longmire.

The mystery is nicely developed and the cast of characters from this rural Montana location is quite colorful (and yet most of us can recognize familiar people here).  The relationship of mentor/student between Chick and Jason is really fascinating and is what makes me want to read more in this series.

Given Longmire’s popularity this is a good time to reissue this older series and I hope it will be enjoyed by a new generation of readers.

Looking for a good book?  Wild Pitch, by A.B. Guthrie, Jr., is the first book in a modern western mystery series and should be enjoyed by fans of both mysteries and westerns.