SO WILD A DREAM – Win Blevins 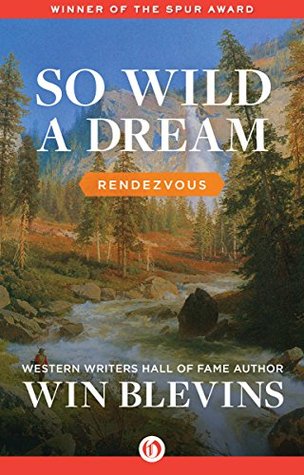 Win Blevins is an author whom I had not heard of before reading this, though that’s likely because my exposure to western fiction has been severely limited.

In So Wild a Dream, young man Sam Morgan begins an epic journey. Stealing away on a flatboat he occasions into a series of characters familiar from our history books (such as William Clark and Jedediah Smith) and encounters a number of different Indian tribes where he falls in love, learns the native ways of doing simple tasks, and faces a cruel death. His response to the latter is to flee and with only a coyote pup as a companion, travels 700 miles on foot to return to the relative safety of a white man’s fort. But the journey of Sam Morgan doesn’t end there … it is only just beginning.

This book is not unlike Homer’s Odyssey, with Sam Morgan as our western Odysseus on an epic return home and running in to all sorts of characters, educational situations, and threats on his life.

Morgan’s encounters with historical figures were less interesting to me than the time he spent with the Indians (I’ll use the politically incorrect term here as it’s the historical term for the Native Americans). The meeting of Clark and Smith (and others) sometimes felt as though it were included for its cleverness and to help establish the time frame for Morgan, neither of which was necessary.  It wasn’t distracting as much as it was just not important to me.

On the other hand, Morgan’s interactions with the various Indian tribes was really eye-opening (from a historical point of view).  This really hit home how the different tribes worked and lived so differently from one another. We (or at least I) tend to lump them together in their behavior and societal structure.

The ending of the book surprised me.  This was not where I anticipated or expected Morgan to go, though it makes sense and is certainly in keeping with his character. (I’m clearly trying not to give anything away.)

The book is the first in a series and I will really look forward to reading more of this tremendous adventure.

Looking for a good book? So Wild a Dream is an epic western adventure by Win Blevins  in the tradition of Homer, and brings with it some great American history.

So Wild a Dream