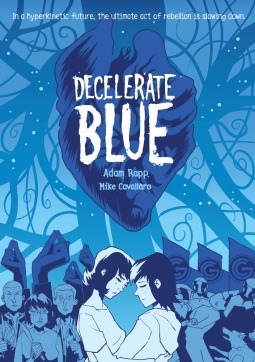 Wow.  This book really took me by surprise.

Is it too hard to imagine a future in which everything is so rushed that even classic literature is abbreviated heavily in order to cram more and more into a day?  I don’t think so.  Just take a look around at our modern life and we’re already closing in rapidly (pun intended) on this sort of dystopia (though we convince ourselves that there’s nothing ‘wrong’ with this).

Teen girl Angela has a problem with the modern rat race but feels as though she’s alone against the whole world.  One day she discovers a banned book under her desk and her life is changed as she is led down a rabbit hole to where a world is patiently waiting.  But to feel as though she is fully joining her new family, she takes on a dangerous job back above ground in the fast world.

I had no idea what the book was going to be about when I started and it took me nicely along on the journey.  Angela comes across as a real individual and it is easy to get caught up in her story – her descent into a world of patience and appreciation and her return to a life of speed and brevity.  She is sometimes a bit tortured, not quite feeling set in either world (though we know where she wants to be).

Curiously, the story sometimes moves too fast.  This appears to be a one-shot graphic novel (as opposed to an ongoing comic series bound in graphic novel form) and there may have been a publishers desire to keep the page length set at a certain range, but I feel we could have learned a little more about every aspect and not felt that it was too long.

The ending also came as a surprise to me (I won’t give it away) and both story and art really add a lot of power.  It’s the sort of ending that doesn’t just lay it all out there but makes the reader pause and reflect.  It was very nicely done.

The art didn’t grab me at first … I think that I was mostly confused by what was happening very early on and the art didn’t help clarify things, but as the story began to make more sense to me, I began to appreciate the art more and by the end I was really looking forward to when I would sit down to read/view this book.

I didn’t find any need for Angela to be in a lesbian relationship.  It doesn’t add anything to the story (it could have been any relationship).  At the same time, of course, there’s no reason for it NOT to be a lesbian relationship, but clearly we’re still living in a time when something like sexual preference will invoke certain pre-conceptions about the characters.  And having such a relationship featured prominently on the cover (see above) may give the potential reader the incorrect idea as to what the book is about.

This is one of the more thought-provoking books I’ve read in a while.

Looking for a good book? Decelerate Blue is a wonderful graphic novel by Adam Rapp and Mike Cavallaro that should catch the reader’s attention and give the reader something to think about.