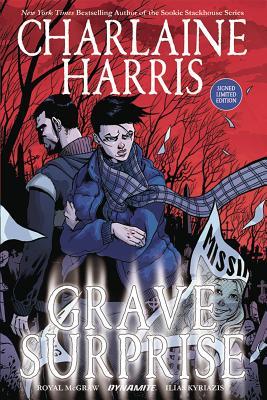 When you read a lot of books for review you are always hoping that something like this will come across your desk and just completely take you by surprise.

Like many people, I suspect, I am most familiar with author Charlaine Harris through her Sookie Stackhouse series, which was the basis/inspiration for the hit series TrueBlood.  I’ve read a few of the Sookie books and find them generally fine. Some clever ideas and interesting characters sprinkled among a bunch of animalistic sex.

I’ve glanced at some of Ms. Harris’ other work as well and find it pretty average fare.  But this graphic novel, featuring a character by the name of Harper Connelly, really grabbed me.

Harper has an unusual ability.  She is able to find dead people and read their final thoughts.  Harper is a bit of a loner, often depressed, though with an ability like hers this is understandable. She and her step-brother, Tolliver, for whom she appears to have a major crush, are in Memphis where Harper finds a grave with two bodies – one of which is the body of a child Harper had been trying to locate in a different city. The two bodies appear to have no connection – so why did Harper find the child now, and why was the child buried in the grave of a man who has been long dead?

The writing in this graphic novel, credited to Charlaine Harris and Royal McGraw, is absolutely tremendous.  I am completely sucked in to Harper’s life – her ability, her frustration, her care and concern for the people we tend to over-look too often. She’s really an interesting character.  Tolliver is equally interesting, but perhaps because we know so little about him.  That Harper likes him makes him worthy of some interest.

The story of the mystery … the two bodies … is nicely done and keeps our interest but really the story of Harper herself is what is most compelling.

The art by Ilias Kyriazis is fine.  The characters are a bit more stylized than I would prefer, rather than realistic.  The tone of the book generally implies a darker realism than Kyriazis portrays, but I’d also have to admit that I am glad all the pages aren’t dark and brooding.

I really enjoyed the concept, the characters, and the story here and I’m hooked.  I want to read more of Harper – both the graphic novel and the book novel works.

Looking for a good book?  Charlaine Harris’ Grave Surprise graphic novel is a dark, intriguing graphic novel that will draw you in.