THE MAKING OF THE RANKIN/BASS HOLIDAY CLASSIC: RUDOLPH THE RED-NOSED REINDEER – Rick Goldschmidt 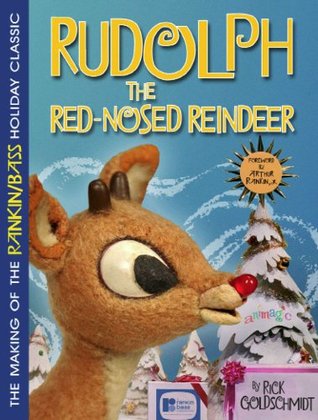 As someone who grew up with this classic holiday program, trying to make sure my parents didn’t schedule anything on the one night of the year that this would air, I was really interested in looking behind the scenes.  I love “the making of” books.  I suspect it was this fascination with behind the scenes looks that motivated my career in theatre (behind the scenes, of course).

When I subscribed to Kindle Unlimited (something I didn’t think I would do, but did so on someone else’s behalf) I decided to see what books might be available for loan.  This was one of the first ones to come up on my screen (scary how well Amazon knows me!) and I checked it out right away.

It is a quick read, and while author Rick Goldschmidt doesn’t go too in-depth, he does touch on a lot of topics and I was fascinated and informed.  I can honestly say that I knew nothing about Rankin, Bass, or anyone involved with the creation of this classic.  I’m still not sure I know too much about Rankin or Bass, but I do know more about Romeo Muller (the writer of the story) and the creation of the ‘animagic’ process.  The animation was done in Japan with a team of people who each had an incredibly detailed chart of their characters’ movements needed for each frame of photography.

I really delighted with the photos from behind the scenes — the sets, the characters and the people posing them.  I liked reading how the posers would wear white gloves to keep fingerprints off of the characters and to try to prevent stray fibers during each shot.

One of my favorite parts of the book was the inclusion of an early version of the script, complete with notes and ‘X’ed’ out dialog.  To me, this sort of thing has always been fascinating … to  see the process, where it started and how it got to where it finished.

I was not aware of the changes, over the years, from the first broadcast to what we see today.  I did not realize that there was a ‘re-do’ on the end credits and that some of the names were misspelled in the re-shoot.  There is also information regarding a new scene and a lost scene that was supposed to air after it was discovered, and still was edited out of the television showing (if you want to know why, you’ll have to read the book).

The Making of the Rankin/Bass Holiday Classic: Rudolph the Red-Nosed Reindeer