SOME OF TIM’S STORIES – S.E. Hinton 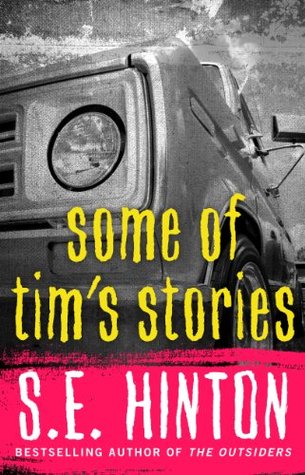 I might be one of the few people on the planet who has never read S.E. Hinton’s The Outsiders or Rumble Fish.  I am familiar with these books, of course, but they were not part of my early reading adventures and I just haven’t gotten around to reading these YA classics.  But when this book, Some of Tim’s Stories, became available for review I was eager to give it a read.

The book is about Terry and Mike, two men who are cousins but are as close as (or closer than) most brothers.  Each of the fourteen included short stories is a reflection on a moment between the two.  The stories are only loosely connected which makes this book a bit of an oddity.  It’s a collection of short stories, but the stories feel as though they should fit together but they don’t quite.  It reads like a novel outline = some random chapters that Hinton wrote and intends to include in the next novel.  But it’s less than that, and more than that at the same time.

“More than that?” you may ask.  Try to follow along…

There’s an obvious question here, given the title of the book.  Who is “Tim”?  Tim, according to a lengthy interview with Hinton at the back of the book (the interview is as long, or a tad longer than the collected stories), is Mike.  Tim is writing these stories about himself and his cousin.  He uses the names Mike and Terry.  So this is Hinton, writing as Tim, writing about himself as named Mike.  Okay.  That’s interested, if not a little convoluted.  And according to Hinton’s interview, the savvy reader will pick up on all this.

Now, nowhere in the stories is it mentioned, or even overtly implied that Mike and Terry are someone else and that one of them is actually writing these tales, so I am a little confused as to how we are supposed to figure this out.  Maybe if I were very familiar with Hinton’s writing?  But I’m not, and I didn’t.  Let’s also remember that typically Hinton’s work is read by a YA audience.  Most young readers that I know are very bright and insightful and yet I still wonder how many of them would pick up on the idea that these are supposed to be stories written by a fictional character who does not appear in a story?

I liked Hinton’s characters, who are very real.  The stories read easily and smoothly, though they did seem to lack a purpose.  I’m more interested in reading one of her more well-known works, based on her writing and characters, but I do hope that the longer works have an actual story to them.

Looking for a good book?  I suspect that if Some of Tim’s Stories were submitted to a publisher by anyone other than S.E. Hinton, it would never have been published.  Try some of her other works before you read this.

Some of Tim’s Stories (The Oklahoma Stories & Storytellers Series)