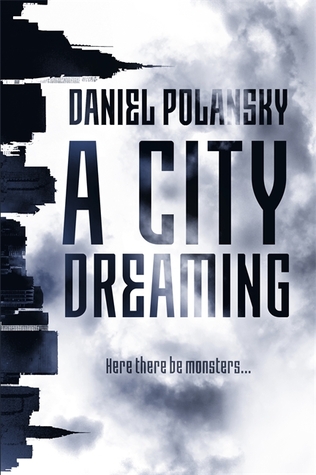 A little over a year ago I review Christina Henry’s Alice, which was a dark, tremendous re-telling of the Alice in Wonderland story. It was sort of like mashing up Lewis Carroll with Franz Kafka.  Daniel Polansky’s A City Dreaming is also a dark, wicked Alice in Wonderland-like adventure, but it adds one more author into the mash-up mix.  Imagine Alice in Wonderland, as told by Franz Kafka, as motivated by Timothy Leary.

“M” is a quick-witted, sharp-tongued loner in the big, bad city. That city, a darker version of New York, is controlled by rival queens: the Red Queen and the White Queen. A war between the Queens is brewing which could bring about a complete apocalypse for New York. In reasons that aren’t particularly clear to me (in fact, clarity is probably my biggest issue with this book) “M” is asked to intercede and keep the peace in New York. Bizarre adventure ensues.

I don’t mind being tossed into a story without any introduction.  If anything, I prefer it, challenging the reader to pick up pieces of history and to make sense of the world along the way. But the necessary information does need to come. The closest we get is when a voice tells “M”: “Everything that is exists simultaneously with everything that ever was, will be, or might have been. Infinity overlaps to such a fine degree as to make the outcome of any event essentially a matter of perspective.”

We don’t really know much about this world.  It appears to be New York City, but with wizardly magic and occasionally occupied by goblins and witches and the like. “M” begins his stroll through the city but his adventures brought him in to little pockets of different realities where he had mini-adventures. Remember that plot about warring queens?  It’s there, but only barely.  It’s a bookend plot to try to ties a series of short stories together. I’ve seen such a thing work before, but in this case there isn’t nearly enough information to work with to pull the reader in and to care about “M” and his adventures.

What keeps us going is author Daniel Polansky’s way with words.  We enjoy his turn of phrase and his cleverness.  But damn… can we get a real story in here? At one point I wrote a note in my book “this book is Gilmore Girls Gone Grimm”

Even “M” – for the short-term – is fun.  His sassy and devil-may-care attitude is fun in short bursts but grows annoying the longer we spend time with him.

I’m willing to give Polansky another read, but I hope it’s a true novel in the sense of character, story, and world-building.

Looking for a good book? A City Dreaming by Daniel Polansky is a ramble of (dark) fantasy elements trying to pull together to tell a story but doesn’t quite succeed.