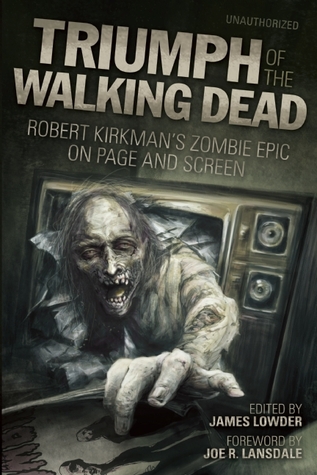 “The Walking Dead” is a surprising television hit.  It is water-cooler discussion fodder, and, like so many pop culture hits of this era (it seems), it is based on a comic book series by Robert Kirkman.  And what happens to ‘hits’?  People analyze them and write about them.  This book is a collection of essays about “The Walking Dead” – both the comic series and the television series.

I’ve never read the comics/graphic novels, and I’ve only watched through the first three seasons of the television series, but the essays here often had me thinking about the series (and the concept) in a much deeper way.  Which, when you stop to think about it, is kind of crazy since we’re talking about a tv show featuring zombies.

But as these essays point out, there’s an awful lot of metaphor and symbolism going on within these stories.

I enjoy non-fiction, and I really enjoy essays on specific topics, and in line with this, I enjoyed these commentaries on this very pop-culture theme.  And while some of these did have me thinking twice about the series, and even had me wanting to finish watching the entire run, and all the essays are very intelligently written, nothing caught me so deeply that I feel the desire to share it with everyone I know.

My favorite essay is probably the first one, “The Pathos of The Walking Dead” by Kyle William Bishop, which examines the genre and its history.

I also very much like Jonathan Maberry’s “Take Me to Your Leader” which looks at the genre of apocalyptic literature and where The Walking Dead fits into that genre, and the role of ‘leader’ through such an apocalypse. “Despite the fact that the Walking Dead comic book is one of the bleakest, most downbeat and nihilistic stories ever told, even in a genre known for those qualities, Kirkman manages to sew a thread of hope through the tale” writes Maberry.

Fans of the series (whether comic or television) who also enjoy more than just the action/adventure of the hour-long tale should really enjoy this.  Those who study pop culture will find this indispensable.

The book features the following:

What does it say about our culture when stories about the dead rising up and wreaking havoc, bringing about an apocalypse, are some of the most popular stories of the day?  A book such as this helps us answer that very question.

Looking for a good book?  Triumph of The Walking Dead: Robert Kirkman’s Zombie Epic on Page and Screen, edited by James Lowder, is a collection of essays looking at an unusual hit television (and comic book ) series which fans of the series will absolutely want to devour.

Triumph of The Walking Dead: Robert Kirkman’s Zombie Epic on Page and Screen