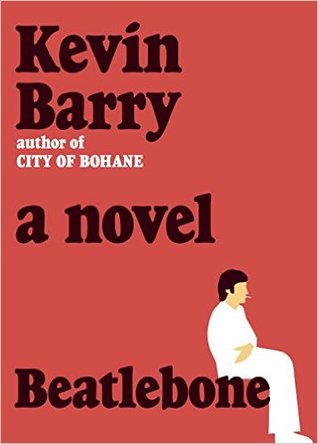 It is the late 1970’s and John Lennon has left New York to seek refuge and solace in an island that he purchased off the coast of Ireland.  But getting to the island is an adventure when he relies on the local shape-changing guide to get there.

This is not a light, easy-to-read book.  It is surreal.  Think of The Beatles’ Magical Mystery Tour film and how it makes a sort of off-beat sense if you want it to, but it mostly seems like a series of strange encounters, with music.  Take the music and three of the Beatles out, and we’re left with Beatlebone.  This is a stream-of-conscience writing, but as if it were coming from the often high Lennon.  It’s a real trip and the reader needs to be prepared for it.

And along with the stream-of-conscience style of writing comes the lack of punctuation (in my ARC, at least) – which has never impressed me.  It strikes me as arrogant on the author’s part.  As if the writer is saying to the reader, “My words are too good for me to bother thinking about giving you what you need to know to read this.”

About two-thirds of the way through the book, the narrative changes VERY suddenly and instead of the story of John Lennon looking to get away from the drudgery of his life as a famous musician who hasn’t produced any notable works in years, we suddenly get a ‘prologue’ or ‘epilogue’ (I suppose it would be called a ‘mesologue’) of author Kevin Barry telling the reader about the research he did for this book.  This section is really quite interesting.  And just as suddenly as the mesologue appeared, it is gone and we’re back with Lennon in is surreal life.

The only reason that this works, this surreal storytelling, as well as it does is because it does feel as though it might come straight from Lennon’s own thoughts.  But just as the reader starts to feel comfortable with it, we’re interrupted by the author.  I’m not quite sure why we need to be taken out of the story when we were.  The dialog (when you can tell that it’s dialog), does sound like John Lennon – or the John Lennon that we feel we know from his public appearances.

I’ve noted before that literary works that play with form tend to win awards, as this one has done.

I’m glad to have read this, but it won’t stick with me and it’s not something I would recommend to the average reader.

Looking for a good book?  Beatlebone by Kevin Barry is a surreal adventure as seen through the eyes of John Lennon.