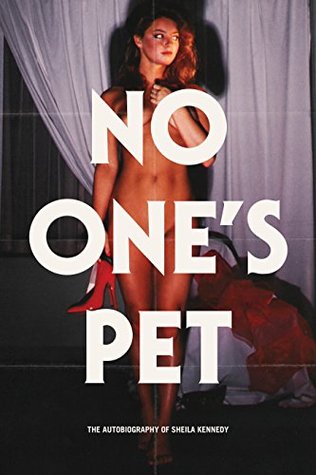 First, let’s point out that this isn’t a biography (or autobiography) so much as it is a memoir.  What’s the difference?  A memoir (typically) doesn’t follow the timeline of one’s life but selects moments that were meaningful and expounds on them, often jumping around.  No One’s Pet by Sheila Kennedy definitely fits the memoir mold.

Kennedy was a wild child, not afraid to speak her mind or challenge (or at least question) authority.    Coming from a home with an abusive father, a negligent mother, and living with a prostitute aunt, it’s not surprising that Sheila found her way into nude modelling.  In fact she seemed tailor-made for it.  But to Kennedy’s credit, she doesn’t seem to look back on this (or much of anything) with anger or hatred.  It was what it was, and she’s moving forward.

Despite this rough up-bringing and a roller-coaster ride of being at the top of the game and then struggling to make enough money to put food on the table, Sheila Kennedy seems to have lived a charmed life.  Whether it’s because of her doe-eyed cuteness, or her wanderlust, or her devil-may-care attitude, she’s gone in and out of settings with people (often influential people) willing to help her along the way.  When she was determined to leave ‘home’ she was connected with one of the top photographers in the country.  When she meets him, she hands him a couple of Polaroids of herself.  He tells her that she’ll never get work and describes what is wrong with her.  But, as a favor, he sends two Polaroids to Playboy and two to Penthouse.  Penthouse responds and she begins a strange journey that most of us could never imagine.

Kennedy becomes one of the first Penthouse models to take up residence at Bob Guccione’s Penthouse mansion, is lavished with gifts from Guccione and given a strange amount of freedom to wander, explore, and date as she chooses, while remaining one of Guccione’s harem girls (though willingly – Kennedy repeatedly writes how much she cared for and was attracted to Guccione).  Staying at the mansion propels her to being a Penthouse Pet of the Month (multiple times) and Pet of the Year (1983).

Not surprising to most of us on the ‘outside’ of this industry, this sort of stardom doesn’t last.  It does have its perks, though, as being a Pet of the Year, she is introduced and has sexual encounters with many leading names in the entertainment industry (and she’s not shy in this book to tell us who is large and who is small when it comes to penis size [because, apparently, it DOES matter]).  But rarely does she describe these encounters as forced (one is definitely worthy of being called rape) but rather her willingness to enjoy these really good-looking men (as she describes them).

What I liked about the book was her style.  She writes very conversationally.  One gets the feeling that we are sitting in a room and listening to her tell about her life.  It jumps around, just as such a conversation might as well.  This was very easy to read and the style gives us an understanding of the person, just as much as the information she shares.

What I didn’t like about the book was what she doesn’t tell us.  Twice she hints at turning to religion during times when she was “at pretty loose ends”.  During one of those times she met Billy Zabka (the mean kid from Karate Kid), a Christian who is Kennedy’s son’s godfather.  But what about these times?  How did they influence her or change her or help her through the tough times?  We get nothing on this other than the quick mention – though I suppose we can deduce that the influence these times had was minimal since it was during one of these times that she began a sexual dalliance with Scott Baio.

One of the things we discover about Sheila Kennedy from this memoir is her innocence … or perhaps a better term for it would be her gullibility, or even vulnerability.  She was vulnerable because of her innocence or her inability to make choices based on more than appearances.  Nearly every man she meets and sleeps with is described as good-looking, or hot, or sexy, or “actually quite charming.”  She is clearly unable to see beyond the exterior or the presentation of a person.  And it is when she wraps up this book that realize that she really has no clue as to how she was presented to the world how the world views her.

For me… There hasn’t been a time quite like it before or since; going on “Late Night With David Letterman”, getting introduced to fantastic artists, prominent politicians, and colorful bottom-feeders…and being recognized as not a sex object but a strong woman making her way in the toughest and coolest city in the world.  There was nothing like it.

(And by the way, what she describes of her appearance on Letterman was his making fun of the prizes she won as Pet of the Year.)

It is fortunate that this was a great time through her own eyes because the alternative would be seriously depressing and because she remains upbeat about it, it makes for a delightful read.  It is true that she was/is strong, which has gotten her into and through many an escapade, but it is also likely true that she remains a bit innocent about much of it.

Looking for a good book?  Sheila Kennedy’s memoir/autobiography No One’s Pet, is an easy to read sexual romp through the entertainment world of the 1980’s.

No One’s Pet: The Autobiography of Sheila Kennedy