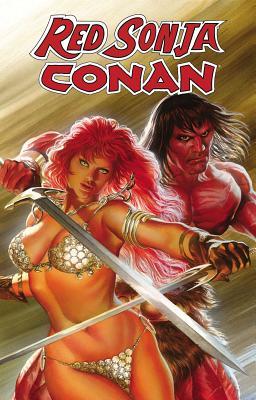 Conan and Red Sonja, together again?  Absolutely!  And it works!

I’ve been a fan of the Conan stories since reading the Robert E. Howard books and stories back in the 70’s.  Then I followed that up with the really excellent comics published by Marvel.  But as with almost any good thing, the market seemed to get glutted with Conan – new books, new comics – and I lost interest.  I’ve picked up a few Conan graphic novels and thumbed through them, but wasn’t very impressed.  But when this became available for review I thought I’d give it a try.

Conan and Sonja are both captains of some mercenary soldiers who have hired on to help a small kingdom fight off a wizard in a neighboring kingdom.  When the local king wants to choose one captain to lead the mercenary army, Conan and Sonja step up to be co-captains, and of course must first fend off some foolish men who think that they should captain the army.  Once the captaincy is decided, Conan and Red move their army out.  When they camp for the night, giant monsters attack the captain duo.  Monsters send by the wizard of the soon-to-be-invaded kingdom.

The wizard’s blind adviser warns the wizard that Sonja and Conan could bring the wizard to ruin, but hubris gets in the way, the wizard confident he can fend of the Hyborean barbarians.  Indeed, the wizard send an entire army of monsters and nearly everyone on the field of battle lies dead.  Except Conan and Red Sonja.  Though Conan doesn’t see Sonja’s body and presumes she is dead as well, so Conan continues on toward the castle.  Sonja crawls out from under some bodies to find looters already going through the pouches of the dead.  She gets the story of the battle from these observers’ eyes, and heads off after Conan.

Conan and Sonja catch up to the wizard, but there is something that gets revealed to the pair and they have yet an even bigger fight, just for their very survival.

This book definitely had a sense of adventure and excitement and just the right amount of fighting to feel like I’m reading a classic Conan story.  The wizard and his secret is not too unexpected if you’ve read this sort of story before, but it works in just the right way.

The artwork is fine.  For the most part it works.  At times it doesn’t come across very well.  Sonja alternates from a tough fighting warrior woman to a cutesy little girl (which is not how I ever picture her) and Conan sometimes has the classic Romita/Buscema/Alcala look and sometimes he looks Native American. Inconsistent, but over-all, worth looking at.

This was a fun romp in the Conan/Red Sonja world and made me want to read some of the original stories again.

Looking for a good book? Red Sonja/Conan: The Blood of a God is a graphic novel that is a decent throw-back to the classic Conan comics that Marvel once published and is worth picking up to read.

Red Sonja/Conan: The Blood of a God