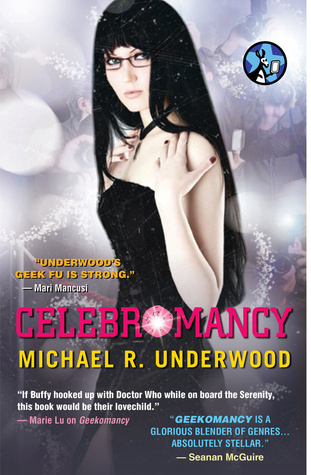 In the first book of the Ree Reyes series, Geekomancy (read my review here) we learn what ‘geekomancy’ is (the ability to manifest, for a short time, the power or attribute of anything or anyone in a movie, comic book on a trading card, etc), and are introduced to the geekomancy poster-child, Ree Reyes.  In this second installment in the series, author Michael R. Underwood takes us on the next part of Ree Reyes’ journey and offers up a new style of magic … the power to win friends and influence people unnaturally (why isn’t this Carnegiemancy?).  And who would you most likely find wielding this power?  Hollywood actors, of course.

Budding screen writer Ree Reyes has sold a television pilot and is in L.A. to see her new show move from the page to the screen.  Ree wrote her script using as much of her geekomancy powers as she could.  But now in Hollywood, she can’t help being a bit of a geek fan, despite her new street cred as the creator of a new show.  High on Ree’s ‘geeking out crush’ is Jane Konrad, an actress that Ree has long admired and who is set to star Ree’s show.  It is Jane who introduces Ree to the power of Celebromancy, but admits that her power is waning.  Perhaps it isn’t waning too much, though, as Jane and Ree begin a an intimate relationship.

Life in Hollywood isn’t easy, even when you have special powers, and when Jane is attacked, Ree gets directly involved to save her show and her new crush/lover.

Author Michael R. Underwood has done a nice job on building on the Geekomancy foundation without simply making a repeat of the initial story.  Bringing Ree into a new world and experiencing a whole new set of powers is nice.  At the same time, however, I really missed some of the characters from the first book.  Grognard?  Eastwood?  These characters were nearly as important as Ree in book one and while Grognard makes a token appearance, Eastwood is nowhere to be found.  While the relationship between Ree and Eastwood was tenuous at best, they still had a common goal that was left unfinished in the last book, and I hope we’ll see them working together again soon.

This book is packed full of action and self-acclaimed geeks should enjoy all the pop culture references.  And what geek hasn’t imagined what it would be like to fire a Star Trek phaser and have it actually work, or wield a Star Wars lightsaber and really be able to cut through something (or someone)?  We enjoy Ree’s actions because she still thinks it’s cool to do these things, to have this power. She is still a geek and we can identify with her because of this.  Pushing her to this new role of screenwriter does separate her from the vast majority of geeks, though,and might endanger her credibility as someone constantly in awe of her powers and success.

This volume didn’t have quite the same impact as the first book had. We’re no longer virgins to this territory and we want something that pushes this special ability a bit more.

As with the previous book, I both read and listened to this story.  I would listen to the Audible version during my commute or while walking the treadmill, and would read from my ARC at other times (usually going back to skim through what I had listened to).  The narration by Mary Robinette Kowal is fantastic.  Ms. Kowal clearly understands the pop culture references and she adds the appropriate energy and emphasis in her reading.  In some cases, I enjoyed her reading of the book more than my own.

Pop culture books seem to be getting some notice by the general reading public, as evidenced by the success of Ready Player One and even Geekomancy.  Perhaps we need a new sub category designation for these sorts of books.  Urban fantasy seems too generic and not quite right.  “Pop fantasy” anyone?

Looking for a good book?  Celebromancy, by Michael R. Underwood, continues the story of Ree Reyes, geekomancer, and is full of action but doesn’t quite have the allure of its predecessor.

I received a digital copy of this book from the publisher, through Netgalley, in exchange for and honest review.