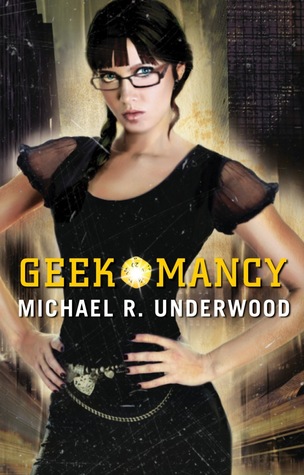 With gatherings such as ComicCon in San Diego getting the national press attention that it does, it surprises me that there aren’t more books that feature pop culture or geek life styles as part of the story (maybe there are and I’m just way out of the loop?).  I think it was Robert Coulson and Gene DeWeese’s Now You See It, Him, Them back in 1976 that I last felt such a geek rush come from the pages of a book.

Imagine that you are a geek (as defined in modern syntax: “a person who is socially awkward and unpopular : a usually intelligent person who does not fit in with other people :a person who is very interested in and knows a lot about a particular field or activity” and typically applies to those who are also participates in a fandom, such as science fiction, board-gaming, comics, popular adventure television, etc), and if you have picked up this book, then you probably don’t have to imagine it too hard.  Now, imagine that you can acquire the talents and/or powers from the books/tv/movies/comics that you enjoy.  Pretty awesome idea?  You bet it is.  Watch a clip from Star Wars and you suddenly have the power to wield a light saber as an expert.  But if you’ve only watched a clip, that power doesn’t last long.

Ree Reyes is a wanna-be screenwriter working as a barista and in a comic shop when a stranger (whom she’ll come to know as “Eastwood” enters her life by way of the comics shop and is followed by a cataclysmic “BOOM” moments later.  Ree follows Eastwood into the magical side of life, trying to stop a strange rash of teen suicides, and discovers she is a Geekomancer …someone with the power to harness geeky attributes.  But is Eastwood  a friend of a foe?

This book is packed with geek fun around a simple, but effective, story.  The characters are not fully realized and yet not completely flat either.  What the book offers is fun, and potential.  It happens that I did previously read a novella in the Geekomancy series (Attack the Geek) which I enjoyed tremendously and decided I had better read the whole series.  This first novel is a bit rough, but fortunately, I know where it’s headed, and I think it’s worth the ride, and worth starting with this book.

I should note that I first started this novel by listening to it on Audible, which can be picked up for a fairly cheap price.  But there’s a reason for that… the narrator for the Audible version is dreadfully dry and brings down the enjoyment of the story.  I returned my Audible copy and went back to actually reading, which was much better.

Looking for a good book?  If you consider yourself a geek or enjoy geeky pop culture, you are bound to enjoy Geekomancy.