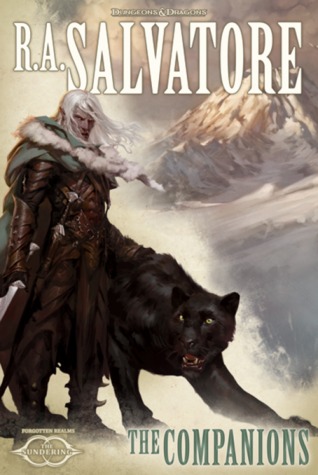 I have been a big fan of playing Dungeons and Dragons and I have been a long-time reader of science fiction, fantasy, and what we used to call Sword & Sorcery.  But for whatever reason, I have never been interested in reading any of the fantasy/sword&sorcery type books that seem directly related to dungeons and dragons gaming.  But a couple of years ago I selected two books published by Wizards of the Coast … a publisher that I’ve long associated with creating books from D&D play (whether that’s correct or not, it’s how I’ve viewed them).

Just over two years ago I read and reviewed The Godborn, which is book two in this series, and I’ve just finally gotten around to reading book The Companions, by R.A. Salvatore, which is book one.  Since reading this, I’ve looked around at the reviews on Goodreads (mostly because my rating is much lower than the average, which always makes me curious).  Apparently, this book begins a re-boot of a book series.  Familiar characters (to some) in new bodies.  Is this important to know?  I don’t know.  There seems to be a fair amount of discussion about it, but I come to this new, unfettered.  Perhaps I’m just the right audience.

Unfortunately, I found this to be a bit dull.

The story starts with the characters being reincarnated, so whereas this is the beginning of a new series, it features characters who have been around and are familiar to those who’ve already read books in this series, which makes a little more sense, now that I look back on it and have this knowledge.  But it does bring up an interesting question … should you go into a book forewarned and forearmed?  Or should you go into a new book a blank slate, without prior knowledge of the characters and their situation?  I prefer the latter, of course.

So there are characters who I should somehow know already. who have a connection to one another, but what that is, and how strong it is, I don’t know.  There are three main heroes here, but it feels like two too many as the story becomes scattered and really, I have no emotional tie to any of them.  Nothing about them, or their journey, has caught my attention.  And I felt a real lack of tension.

There were moments (usually during a battle scene) that brought back memories of playing D&D, but I’d really much rather play a game than read more books in this series.  It seems to be getting great reviews, but clearly this is a case of ‘to each his own.’  I suspect that this book is primarily catching the attention of those already invested in the series, but for this newbie, it failed to bring me in to the Sundering world.

Looking for a good book?  R.A. Salvatore’s The Companions is the first book in a ‘re-booted’ Dungeons & Dragons type book series, but it’s connection to a previous series is strong enough that it may be difficult for readers new to the world to get fully interested.

publisher: Wizards of the Coast