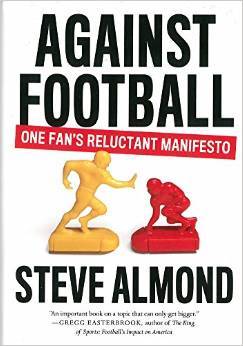 I have been a fan of Steve Almond’s writing for about a decade, since I read My Life in Heavy Metal, his collection of short stories.  Since then, I’ve purchased every one of his books (though I think I haven’t read a couple of them yet), so of course I was eager to pick up this one.  As a bonus, Mr. Almond was speaking at my local bookstore and I got to listen to him talk a bit more on the information he presents in this book.

It’s important to take in the whole title of this book.  Yes, it is a book ‘against’ football, but it IS also written by a fan.  Almond makes it very clear that he’s no different from millions of Americans and how much of a fan of American football he is (though he also admits to being an Oakland Raider fan, which I think is a brave move).

So why is a fan writing a manifesto against football?  Well…that’s why you need to read the book, but Almond presents the reader with a wealth of information, primarily on the state of concussions and how they are treated by those in professional football and the by the reporting media.

But this isn’t just about the concerns about concussions, which is finally being discussed a bit more widely lately.  Almond discusses our taste for violence, how racism is played out in the sport, as well as how a multi-billion dollar industry that is making a few men very rich, has somehow managed to be classified as a tax-exempt organization.

Do you see where this is going?

Almond is a very persuasive writer and he is clearly both passionate on this issue, as well as conflicted.  And it is this conflict that is most interesting.  Not just Almond’s conflict, but nearly everyone he talks with, including research physicians who have studied the effects of concussions but still talk about ‘Sunday’s game.’

Like Almond, I grew up in an era when it was so common to sit around the television watching our favorite team (for me, the Vikings) and one or two other games.  How we become hooked on the sport and how that hook has been developed and encouraged by so many outside factors.  And like Almond I’ve found my own interest in the game waning … for some of the reasons he mentions here as well as a few of my own reasons.  And still I watch the game.  I’m no longer a “can’t miss it” person, but if there’s a game on and I’m home, chances are the television is on and the game is playing.  Even if I don’t sit and watch it.  And stranger yet … football is about the only thing that we ‘watch’ regularly’ in our house.

This book should be read by anyone with even a passing interest in the sport.  The sad thing is that it won’t be.  Make a difference and be one of the people who DO read it.

Looking for a good book?  Steve Almond’s Against Football: One Fan’s Reluctant Manifesto, is well written explanation of the problems with our modern gladiatorial sport, football, and why we shouldn’t be supporting it … and why we still will, even though we know better.

Against Football: One Fan’s Reluctant Manifesto