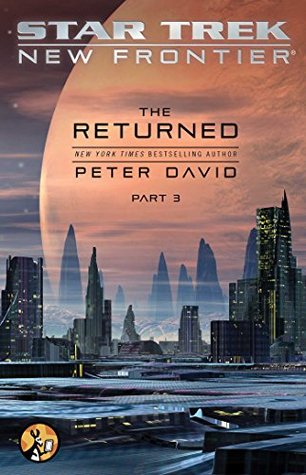 A couple of disclosures:  This is part three of a three-part series, and while I read/reviewed the first book (see that review here), I did not receive a review copy of the second part.

One of the things I noted in the first book is that it isn’t a stand-alone book.  The three books must be together for a complete story, and I don’t think very highly of books published this way.  And of course, if you don’t have part of the story, it definitely makes it difficult to review the book.  But if the publishers are going to publish this way, then it deserves to be reviewed this way.

This is a Star Trek: New Frontiers story, featuring Captain Mackenzie Calhoun and the crew of the U.S.S. Excalibur, and I have enjoyed all of these stories that I’ve read previously.  It is a welcome sight to see them all back again.

There appears to have been another couple of cliff-hangers at the end of the second book.  In fact, just as the first book was a whirlwind of action, so is book three, but the reader is a bit behind here.  Calhoun is no longer trying to destroy those who eradicated his race.  In fact he seems to have had a change of heart toward those survivors on board his ship.

There was the typical amazing Peter David energy and multiple storylines converging here, but there was one aspect that brought this book down for me.  Q.

I don’t know if Q was in book two or not, but he makes his presence known here and plays a significant role.

I am not a fan of the character Q.  I feel he’s been over-used as an antagonist in Star Trek stories, and he’s just not that interesting to me.  This book does not change my impression of the character, despite David’s handling of him (and I think David is a fine writer).

I really like the New Frontier spin-off series, and I think Peter David is a tremendous writer and does a really nice job in the Star Trek universe, but this book, AS a book, does not hold up.  And as the third part of a series?  Perhaps fine, but I would need to read all three to get a sense of the story.

Looking for a good book?  Peter David writes in the Star Trek world as well as anyone, and it’s great to have his New Frontiers series back in action, but this mini-book, The Returned, Part III, should have been published as one book as this definitely does not stand alone as a book.