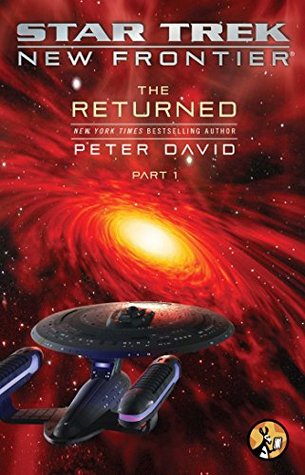 I definitely have a soft spot for Star Trek books, being the ST nerd/geek that I am, and for quite a while I read most of the books that came out.  Then the market got glutted with books and I weaned myself off of them, stopping altogether until I began this blog.  One of the last books that I read in the ST universe was one of the first books in Peter David’s New Frontiers series.  And I loved it.  I loved the characters he created.  Such an integral part of building a Star Trek world … the characters would have to carry on with some of the same general themes as those that Gene Roddenberry created, but David worked his magic quite well.  And so…to see a review copy of this book pop up among the books available, I jumped at the opportunity.  And I’m delighted to report that the magic is still there.

Captain Mackenzie Calhoun and his crew of the U.S.S. Excalibur are on the hunt for a race called the D’myurj who annihilated Xenex. Their search leads them to a ‘pocket’ universe — another universe that can only be accessed by way of a wormhole.  But access to the wormhole can only be gained by enter Thallonian space and the Federation is not on good terms with the Thallonians.  There are also rogues in Thallonian territory who are looking to kidnap and/or kill Robin Lefler’s child.

Peter David really understands how to milk to the drama out of a moment (and I mean that in the nicest way!).  He also understands the Star Trek universe and maneuvers his characters and plot well within this frame.

I was definitely hooked on the story (I sense that there is a tie to the previous books, but since I didn’t read the series (now out of print) I can’t be certain) and David shifted between story-lines smoothly and kept me wanting to read more to keep up with the different stories.  I am extremely interesting in seeing where this goes.  I’m particularly captivated by the McHenry/Lefler story-line.

This is a novelette/novella and the first part of a three-part series.  Unfortunately it doesn’t really stand alone as a complete work (beginning/middle/end), but the first part of a serial, and if you’ve read many of my reviews, you will know that I don’t like it when publishers release a book that isn’t a book simply to get us to buy the next one.  I know…this is nothing new.  Writers have been doing this for centuries.  But I do think that if it’s released as a book, it should be a complete book.

Even so, I enjoyed this for what it is…Star Trek escapist fiction.  But because it’s with a different crew and different ship, there’s a slightly different edge of energy that comes with it, and I appreciate that.

Looking for a good book?  It’s not a stand-alone book, but The Returned, Part 1 by Peter David is good sci-fi fun and fans of Star Trek should really enjoy this book.

The Returned, Part I