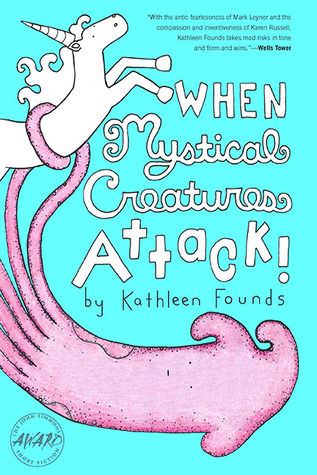 I should start by stating that I am often very wary of books that have won awards that I have never heard of.  No, I am not the world’s authority on literary awards, and no, I don’t mean to imply that the award was created specifically for that book (though I have run across that).  What makes me wary is that too often I have found that these sorts of awards tend to go toward ‘form’ rather than ‘content.’  I feel that this holds true here.

Ms. Freedman is a high school English teacher in a class full of misfits.  In an interesting and creative move, she asks her students to write essays where mythical creatures solve the worlds social and political problems.  But Ms. Freedman suffers a mental breakdown and is sent to an insane asylum.  There, she corresponds with two of her students, Cody and Janice.

The book is told through narrative, letters, and the class’s essays.

I liked the foundation of this book, and what it sets out to do, but it feels … messy.  Incoherent.  It doesn’t follow one person, and it doesn’t stick with one narrative format.  It’s essentially a whole lot of short pieces that sort of tie together, but as short pieces, they don’t really stand alone and as a whole, they don’t form one very cohesive story.

Even though I could see the unique and interesting aspects here, and I often enjoy off-beat fiction, I struggled to get through this book.  The classroom, as run by Ms. Freedman, was totally out of control.  Early on, I had such little respect for this ‘teacher.’  Her class seemed to run over her, but she seemed to allow it.  Instead of feeling sorry for a teacher with an unruly class, I felt sorry for a class with a teacher who didn’t know how to handle her work.  But then she’d do something interesting, like assign a clever essay.

Mostly I felt that this book was as much as mess as was the classroom.  I don’t think that’s the sort of metaphor the author was trying to get at.

Looking for a good book?  When Mystical Creatures Attack! by Kathleen Founds struggles to tell a story and rambles with a whole lot of short pieces.