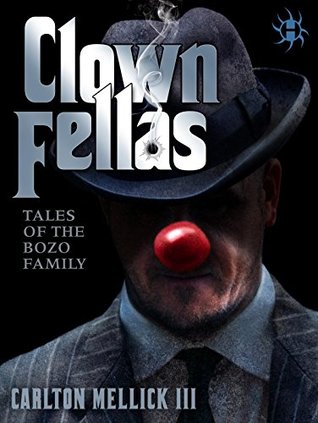 Alright… so ‘bizarro’ fiction has become a “thing.”  I mean … I know that there’s been bizarro fiction for a long time (I think I was writing it back in the 80’s), but it hasn’t always had its current classification (it was speculative fiction, with a twist back then).  Now it’s its own genre.  And I love bizarro fiction.  One of the earliest reviews on this site was for Blope, an excellent bizarro story, so I was pretty interested in this.

ClownFellas is a short story collection in which the stories loosely fit together to tell a novel-length story.

Is this bizarro world, mob-like families are circus clowns, with the leading family being the Bozos, and telling jokes is against the law.  In addition of fending off the police, they have a rival circus of clown from France (La Mystere) trying to hone in on their territory. The clowns will probably kill you, but they’ll likely throw a pie in your face first, or squirt seltzer down your pants before cutting your neck because, well, they’re clowns!

In the first ten pages or so, I laughed and nodded approval at some of the gags, and I rolled my eyes at a few that were too obvious, and I was maddeningly frustrated at being told, SO many times, what the term for a fear of clowns is (it’s coulrophobic).  And then I had 400+ more pages to read.

Essentially, this is one giant joke.  Substitute clowns for mobsters and see what funny things we can make of it.  The answer is: not a lot.  Once the novelty of this idea wears off (about ten pages for me) there’s not much else here to hold the interest.  As mobsters, I really don’t care about these people.  As clowns they are slightly more interesting, because they shouldn’t act like mobsters.  But they do.  I think that’s the basic problem here…it doesn’t go far enough into the bizarre.  It’s as if Mellick took the Godfather and made everyone a circus performer.  That’s really only changing the surface of the characters … their appearance and the kinds of slapstick they might do in public.  But Mellick doesn’t change the way they think, or what motivates them.  Not really.  And so we’re left with a mob book that relies on one joke – substitute everything with clowns, jokes, and pie throwing.  Ha ha, isn’t that funny!

This looked really interesting (I don’t request a book to review unless it looks interesting), but it really didn’t follow through on what it set out to do, at least not for this reader.

Looking for a good book?  The joke is on the reader because ClownFellas by Carlton Mellick III, relies on one basic gag all the way through 450 pages.