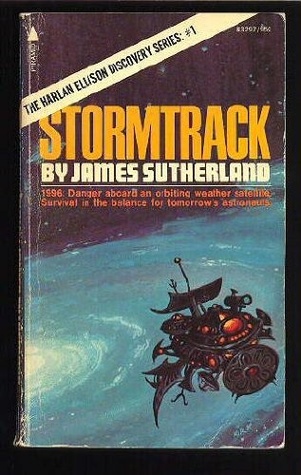 Reading old science fiction, which was set in the future at the time the book was written, but which is now in our past, can be a real hoot!  Parts of this story are frighteningly real today, but some of it just makes me shake my head.

Set in the future of 1996, the men and women aboard the Boreas, an enormous meteorological satellite are the first (and last?) line of defense for all humankind as a mega-storm threatens the planet.  As with most good science fiction, the science is a backdrop to the story and the story is about people.  But people are dangerous and it’s possible that the devastation of Nature is tame compared to the wars, and politics, and corruption of humans.

This book, first published in 1974 has some surprisingly correct predictions.  The volatile fury of nature, for one.  In the last few years from when this blog is being written, we hear reports of un-natural weather patterns and super-storms which are reaching a fierceness that has never been witnessed before (due to our destruction of the ozone – which is NOT mentioned in the book).

The other eerie prediction is the space station Boreas.  While the International Space Station is nowhere near as luxurious as the station in this book, the idea that there are men and women living on a station that orbits the earth, monitoring weather (and other things), really was just the idea of a a science fiction writer in ’74.

But while these were nicely thought out, there were times I raised an eyebrow: a man arrives on the space station and lights up his pipe.  Smoking?!  In an enclosed pumped-oxygen environment?  Really?  That made me shake my head, but I actually chuckled when people started to use a manual typewriter on the station.

Despite science that doesn’t hold the test of time, this book was an enjoyable read.  A battle, of sorts, for power, on the station is interesting, and the backdrop of a super-storm threatening Earth adds an extra element of danger.

If you should see this book available in a used book store somewhere, it’s worth reading.  Which shouldn’t be a surprise — this is the first book in The Harlan Ellison Discovery Series.  Harlan Ellison has some pretty high standards.

Looking for a good book?  Stormtrack, by James Sutherland, is sci-fi from the mid-1970’s that is worth reading if you should run across a copy.