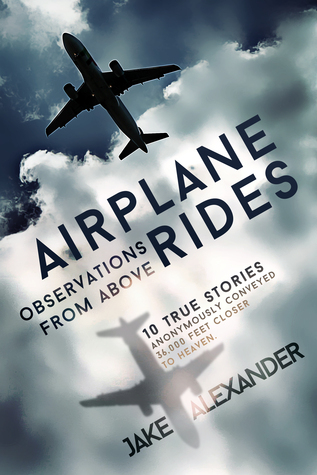 What has the potential to be an interesting, soul-observing study of humanity, instead becomes a self-centered, hedonistic exploration by one man.

Jake Alexander (a pseudonym for a finance executive) does a lot of flying (first class … maybe business class) and of course has thus met many people – his seat mates. Jake Alexander also believes that he has a special ability to get people to open up and talk. And thus, we have what could have been a truly insightful book.  The opportunity to record a stranger’s thoughts, revealed at 35,000 feet, when a person is confined, perhaps worried and thinking about his/her mortality because of the flying, perhaps slightly inebriated from the flowing booze in first class … is a unique opportunity, and Alexander tends to use it for his own sexual appetite.

He tells us early on:

Occasionally, a bible story would catch my attention. In particular I liked the one about Mary Magdalene – perhaps the foretelling of a future struggle for my own redemption, but more likely an early indication of a developing fascination with promiscuous women.

And not all his exploits are in the air.  As a traveling man, with temporary, but repeat visits to different locations, he would have:

One joint for breakfast, the other for dinner, each with waitresses that knew me by my first name and occasionally showed up at my apartment offering late-night dessert.

What the astute reader will discover is that Alexander’s ability isn’t in getting people to open up and confess their secrets to him … it’s that he is quickly able to discover the people who are the most damaged and vulnerable and that he can take advantage of their vulnerability.  At least once, in the ten stories he tells, he comes across as being a little above the level of sex-starved-caveman … but just barely.

I am greatly disappointed in this book.  I don’t see any reason why anyone should be interested in reading this.  If the real Jake Alexander was anywhere near as good at getting people to talk as he pretends he is, and if he flies as much as he implies, there should certainly be more than ten stories here (though I’m thankful that this was brief).

This is the second ‘true story’ book I’ve read in the past month that centers around airplanes and flying (see my review of Cabin Fever), and both of these books prominently feature wanton sex on the part of the narrator.  Does flying a lot make one lonely and starved for companionship, even temporary company?  Does their lack of anchor fuel them to tell stories of the sex lives to every stranger willing to listen or read?  I think I’m ready to read my first romance novel so that I can get a little plot with the casual sex.

Looking for a good book?  Airplane Rides: Observations From Above is a bit of a misnomer as it doesn’t observe much, and it’s not worth reading, even if it’s the only thing you brought for the airplane ride.

Airplane Rides: Observations From Above