THE ADVENTURES OF BASIL AND MOEBIUS VOLUME 2 – graphic novel 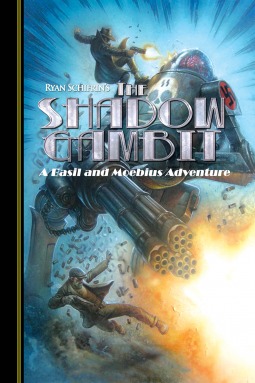 This is an action/adventure series featuring Alaric Moebius and Basil Fox, one a member of the Queen’s Guard and the other a playboy thrill-seeker.  Both seem to enjoy the fast-paced ride of excitement rather than being do-gooders, and both seem to have no more fore-thought than a sixteen year old during Homecoming.

In this volume, the first thing that is noticeable is that the art is significantly better and more consistent than that in the first volume.  Thank you Robert Atkins and Fritz Casas for the fine work here.

Larry Hama’s story here actually builds with some plot (which the first volume did not seem to do well), and there is a little more to the story than simple attack and shoot.  This book builds some more mystery regarding the boys’ benefactor, known as The Collector, and it adds a speculative or weird tone to it, with the inclusion of ‘Cthulhu’-like creatures against a backdrop of Nazi robots.

There’s plenty of action and Moebius and Fox get out of their scrapes as much by luck as by fire power and the temerity to believe that they won’t come to any harm (which again harkens back to those sixteen year olds). Comparisons are likely to be made with the Indiana Jones movies, given the sorts of things that Alaric and Basil are doing and fighting against.  There certainly are some similarities, but Fox and Moebius never actually feel like they are in mortal danger.  Whether this is because they themselves seem to lack fear for whatever they are up against or because there’s just too much constant ‘danger’ that we become immune to the significance of what they are doing, it’s difficult to say.

I did enjoy this book, but ultimately, Basil and Moebius are still not really lovable yet.  A sixteen-year-old acting like a sixteen-year-old is expected and sometimes even ‘cute.’  We look at them (sixteen-year-olds) and smile and think ‘someday they’ll learn.’  But two men in their 20’s or 30’s, one supposedly a responsible member of a Guard, acting like teenage boys is not so cute or endearing.  It’s kind of pathetic.  And that’s where we’re at… an action/adventure series with some heroes who haven’t grown up yet.

This was fun, and actually had me interested in reading the next volume, which is more than can be said for the first volume, but it’s still got some growing to do.

Looking for a good book?  The Adventures of Basil and Moebius, Volume 2, is high on action, manages some interesting storyline, and the art is good.  It’s worth reading if you happen across a copy.

The Adventures of Basil and Moebius Volume 2: The Shadow Gambit