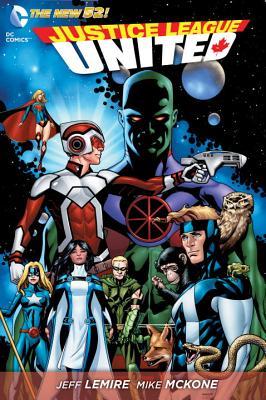 I had high hopes for this book.  I saw that it was set in Canada and I thought “Great!  Why not?  If there are superheroes with powers in the world, why DON’T we have some in Canada?”  (Of course some of my friends and readers who read comics and graphic novels much more regularly than I probably know of a number of heroes in the north.)

The book started out interesting, or at least with an interesting concept… members of the Justice League are in Canada doing a little PR and signing autographs.  Yeah … that’s pretty good.  Some good press and publicity should help them counter-act some of the bad PR they surely must get when their battles destroy entire cities.  I like this idea.

But then we get in to the story and it goes downhill.

Animal Man and Stargirl are the designated superhero representatives signing autographs (I guess you don’t send your “A” team to Canada?) and are convinced by anthropologist Dr. Adam Strange that something weird has occurred not too far away in the woods and they go to check it out with him.  They discover something strange indeed and battle some odd aliens, but need help and get rescued by Martian Manhunter and Green Arrow — which begins 125+ pages of verbal sparring and disrespect between Green Arrow and Animal Man that grew old after three pages.

Although the scene starts in Canada, a good portion of the action takes place in space or on alien worlds.  There is nothing uniquely Canadian here (though I’m not sure what would be ‘uniquely Canadian’).

The story itself, with the aliens, the child, and Martian Manhunter being a sort of guru to all things non-human was just dull.  I’m getting a little tired of Manhunter being used to impart some information to the reader so that we can be told when and where we are and who all the different aliens are.

The introduction of the new superhero, very uniquely Canadian — Inuit, I believe — was really nice.  This was the one saving grace for me with the book.  It will be interesting to see her in action in her own story.  But everything that lead to her tale was much too drawn out.  This has the feeling of a single comics issue that’s padded with unnecessary dialog and exposition to get four or five issues out of it — just enough to put together a graphic novel.

The art, by Mike McKone, is pretty standard fare for comics art these days, which is to say inconsistent.  Sometimes it’s very nice, and sometimes it’s very rushed looking.  I wouldn’t buy this book for the art, but I would necessarily NOT buy it for the art either.  But back to Martian Manhunter… what the heck is up with his appearance?!  Early in the book he had the smooth-head appearance, and later in the book we had a very angled, rough, almost lizard-like appearance.  I thought maybe one of the aliens they were encountering was doing something to him, but no one in the issue made comment on it and I realized it was just the artists decision to change his appearance.  I was maddened by this!  I understand that he has different ‘looks’ depending on the comic or cartoon episode that you might see, but to change it mid-stream?  Really?  Is this the quality of book we’re looking at, that there is no consistency?

All in all, this book was a major disappointment.  At least we met someone new who shows promise … now put her stories in someone else’s hands.  Please.

Looking for a good book? This graphic novel introduces a new superhero but draws out a short story into a novel in order to do it.