IT SHOULDN’T HAPPEN (TO A DOG) – Don Freeman 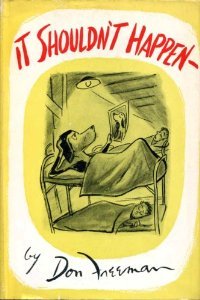 It took me a little while to remember where I knew Don Freeman’s name from, but it clicked while I was reading this.  Freeman is the author/artist of the children’s Corduroy books — books about a stuffed bear that I used to read to my children quite regularly.

It Shouldn’t Happen (To a Dog), while an illustrated book much like his Corduroy books, is not intended for children.  Instead, Freeman writes (and draws) a story based on his military days, drawing (literally and figuratively) on the treatment of the enlisted soldier. The fact that Freeman is a black man compounds the inequality and treatment he receives.  But as an enlisted man, he is unable to complain.

In the course of the story, our soldier feels his treatment is so bad that he couldn’t be treated worse if he were a dog, and wakes up in his barracks one day, having turned in to a dog.  We follow him then, being treated like a dog, yet hardly any different from any of the other soldiers.

Writing/drawing an illustrated story, almost a graphic novel, is a great way to get a message across when you can’t speak up.  But Freeman’s story is not as clear-cut as it could be.  Our hero-dog manages to shine as a soldier, but then he winds up AWOL, but then back in the ranks.  I’m not quite certain what point Freeman is trying to get across.  It’s hard to respect and enjoy a soldier, even a dog/soldier, when he is not toeing the line.  His exploits as a dog deviate from the sorts of things a soldier typically has to do.

I appreciated seeing some of Freeman’s drawing work other than Corduroy and I greatly appreciated the historical look at the United States’ military during a turbulent time.  Beyond that, though, this just isn’t a strong book.  While the art looks like it’s for kids, the story really isn’t.  And while the personal, historical look at the military is interesting, it’s not really told in a way that would rally history buffs to buy it at the book store.  This is the sort of book you hope you can find in a local book store.

Looking for a good book?  It Shouldn’t Happen (To a Dog) is a fictionalized personal account of life in the military, told through the drawings of a noted children’s book author/illustrator, Don Freeman, and may be of some interest to readers of history and military history.

It Shouldn’t Happen (to a Dog)