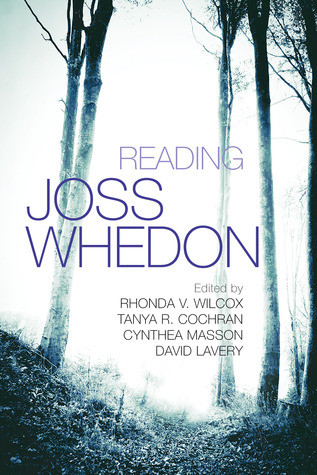 If you don’t know who Joss Whedon is, you should.  He is a prominent figure across a number of different mass media outlets.  Famous for creating the iconic Buffy the Vampire Slayer movie and television series, he has created a number of tv series’ that have garnered much attention and praise (such as Firefly and Dollhouse and Agent’s of S.H.I.E.L.D).  He is also the force behind the blockbuster The Avenger’s movies, but is also noted for his creation of the internet sensation, Dr. Horrible’s Sing-Along Blog.  Simply put, Joss Whedon is a creator whose works have probably caught your attention.

And…being someone who’s work is much watched, it only follows that fans and critics of the work will discuss and dissect it and compile that work into scholarly books.  This is that book.

Be aware that this is not light reading.  This is academic, scholarly analysis of Whedon’s work and how it relates to his other works and how it identifies Whedon the person.  As it notes in the introduction, “Scholarly writing on Whedon has been produced at a faster rate than any other figure in television studies” and “There is more yet to say; there always will be more to say on Whedon, and that is one of the things that prove him to be an artist.  Best of all, he has more to say: his revels are not ended.”

I can easily see this book as a recommended text-book for a college course on media studies or even a course or segment of a course on Whedon’s work.  Much of the writing comes from academia professors ( PhD candidate in Film and Moving Image Studies; a Research Analyst at Georgia State University; a Professor of English; a JSD candidate at Columbia University; an Assistant Professor; a university English teacher; a Professor of English; an Associate Professor of English; a Professor Emeritus; etc etc etc).  While these professors may be fans of Whedon’s work, this is not your typical fan writing.  This is writing coming from academics who often need to publish scholarly work on occasion to make their departments and their tenure, look good.

(I guess you can tell how I feel about this….)

I don’t mind scholarly works.  I like to stretch my brain a bit, but I think the way to judge such work is by how much I get out of it.

Despite its 461 pages, I came away with very little new insight or new appreciation for Whedon’s work.  The most valuable insight I got actually came from the book’s introduction, “Much Ado about Whedon,” as Rhonda V. Wilcox wrote about Whedon and music:

Like Shakespeare, Whedon is perfectly comfortable using music to enhance a character, deepen a theme, or even advance a plot. (Shakespeare planted a song about men as deceivers in the middle of Much Ado.)  Probably the most famous instance of Whedon’s musical work is the musical episode of Buffy for which he wrote both lyrics and melodies.  He also wrote melody and lyrics for Firefly’s theme song and melody for Shakespeare’s Much Ado lyrics.

I would have liked to explore Whedon’s musical expression a little more (though Ms. Wilcox does mention that there already exists two “full volumes of essays” devoted to Whedon’s music).

Despite the rather awesome essay title “Hot Chicks with Super Powers: The Contested Feminism of Joss Whedon” by Lauren Schultz, I was mostly bored with this collection.  I generously give it three stars because of the subject matter and because nothing is necessarily poorly written or weakly discussed … it’s just that nothing is dramatically revealed.  I didn’t really learn anything about Mr. Whedon or his works.

Looking for a good book?  Anyone looking to critically study the works of the magnanimous television and film writer/director/creator/producer Joss Whedon, may want to explore the essays in Reading Joss Whedon – others may just want to watch a Buffy rerun.