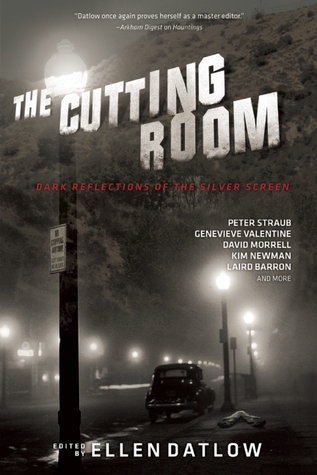 Editor Ellen Datlow puts together some really good books and this might be one of my favorite to date.  Dark fantasy/horror stories strung along a theme of films and filmmaking.  What a brilliant concept.

There are some well-known authors included here (such as Dennis Etchison, F. Paul Wilson, Peter Straub, and Laird Barron) as well as some names that are new to me.  But all the stories are well done and many of them manage to capture a film-noirish feel.  It’s difficult to choose only one or two favorites in this collection.  Some of the stand-outs to me were:

THE HANGED MAN OF OZ by Steve Nagy is creepy in that ‘make-you-look-over-your-shoulders’ sort of way.  I want to watch The Wizard of Oz now, just to look for these things!

DEAD IMAGE by David Morrell isn’t as dark as some of the others, but I was quickly hooked on the story and Morrell’s story-telling.

SHE DRIVES MEN TO CRIMES OF PASSION by Genevieve Valentine was beautiful and haunting.

I tend to think Laird Barron is one of the best dark fantasy writers since Robert Aikman (who I thought was pretty spectacular) and his story ARDOR will help cement his reputation for strong writing.

ILLIMITABLE DOMINION by Kim Newman manages to be humorous, engaging, and slightly dark and is a great way to end the collection.

I personally feel that short fiction is the ideal format for horror and dark fantasy literature and the theme of film/film-making is absolutely brilliant and Datlow collects a very nice assortment.  This collection is highly recommended.

Looking for a good book? The Cutting Room is an excellent collection of dark stories around a film theme.

The Cutting Room: Dark Reflections of the Silver Screen