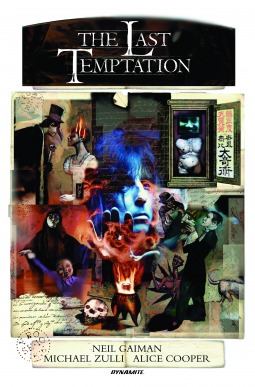 Neil Gaiman has the Midas touch when it comes to anything in the publishing industry, graphic novels in particular.  Of course he’s earned that through hard work and awesome writing.  But even Midas had his early years.

I really respect Gaiman’s work, though I wouldn’t count myself among his most ardent fans (perhaps because I haven’t read every word he’s written) and I wouldn’t consider myself a fan of the music of Alice Cooper by any means (though who can’t sing the refrain to “School’s Out”?).  Yet I can see where the two might go hand in hand.

The partnership appears to have been instigated by Alice Cooper, and Gaiman, early in his career (this is a 20th Anniversary Edition), was accommodating.  The sense of Gaiman’s story-telling is obvious.  The magic.  The sense of a reality beyond what the average person sees is very much in evidence.  The use of a child, or young teen, is very much in evidence.  As is the swirling dark, magical world that would appeal to fans of Gaiman and Cooper both.

What there isn’t, is much of a story.  This is 100 pages of figurative trick-or-treating.  A Showman (Cooper) trying to trick a youngster (though there really is no reason for it), who turns the tables, but is never the victor.  Does this make sense?  It doesn’t need to.  It’s really all about Alice Cooper appearing in a comic book/graphic novel and Neil Gaiman getting to play in his fantastic world.  For these two things, this book works.  For a good, strong story?  not so much.

The art is broodingly dark and appropriate though not always clear.  The youths are not drawn as sharp and as consistently as the rest of the characters or scenery.  But the opening panels of autumn leaves and the crow are outstanding and really prepared me for an awesome work.

I would like to have liked this a little more.  It’s certainly interesting from a Neil Gaiman retrospective standpoint, but not so much as a current work.  This reissued, deluxe edition includes a copy of Gaiman’s ‘original outline’ for the story, and about 40 pages of script for the book.  Interesting, but every other graphic novel is doing this and it no longer seems like much of a bonus but an expected part of the experience.

Looking for a good book?  Neil Gaiman fans and Alice Cooper fans might really enjoy the chance to read this book, The Last Temptation, but it’s not a particularly strong story on its own.