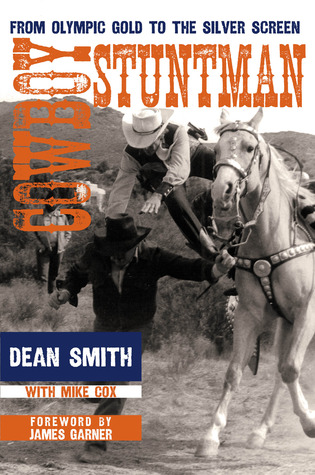 First, let’s be clear that this is a memoir, and not a biography (or autobiography).  What is the difference?  A memoir is a collection of selected memories.  They don’t always have to be told sequentially, from youngest to oldest (though in this case they are).  A biography, on the other hand, is the story of someone’s life.  I like the way Wikipedia puts it: “An autobiography tells the story of a life, while memoir tells a story from a life…”.

Why is this an important distinction?  Because if you are looking for a biography/autobiography of Dean Smith … Olympic Champion and Hollywood stuntman … you may be disappointed.  But if you want to hear (read) stories that Dean Smith has to tell about his years running and doing stunts, you will be incredibly entertained.

What is nice about the narrative style that Dean Smith and Mike Cox have created is that you really do get the feeling that Dean is an incredibly personable guy who loves to sit around and tell stories.  And because of the type of work that he’s done and the people that he’s met, he’s got a lot of stories.

Smith starts the book with one of his most high-profile stunts…hanging from a helicopter as it flies over the Statue of Liberty and other New York sites for the film The Lonely Guy, and then quickly turns back the clock to set up his beginnings in Texas.  Smith had a bit of a privileged upbringing, raised on a large ranch in Texas that had been in the family since the mid-1870’s.  We get a pretty good background on the family history, though even here we likely get equal parts anecdote and history.  We learn that his mother died young and his father was an alcoholic and he was largely raised by his grandparents.  Raised during the Great Depression, the Smith’s managed to live off their own land.

Growing up on a ranch in Texas, it should be no surprise that Smith got involved in rodeos.  Earning prize money at the age of fourteen.  It seems like a fairly natural connection … rodeos to stuntman.

In school, Smith joined the football team and it was there he discovered he had a gift of speed which inspired he coaches to talk him in to going out for track.  Winning many (if not all) his track meets in the 100 yard dash through the next few years, Smith found himself on the Olympic track team for the 1952 Olympics in Helsinki.  Smith makes sure we understand that he wasn’t at his peak.  A little ‘lost’ in a different country and not quite as fit as he should be.  Still, in the final race, he says it was the closest race in Olympic history and took hours to determine the winner.  Four runners all finished with a time of 10.4 seconds and Smith, it was announced, placed 4th.  Smith seems sure that he should have been at least 3rd, and that if he had run the way he’d run all year, he would have won the race.

Yes, Smith has a little bit of hubris.

Smith and teammates did win gold in the 400-meter relay.

Dean continues to run (successfully) and enters the National Football League, but not for long.  Joining the Los Angeles Rams, Smith chooses to leave football rather than be traded to the Steelers.  His real desire is to work in film.  Because of his background with the rodeo and having grown up around horses, Smith eases in to work as a stuntman doing saddle falls.  It’s 1957 and movie (and television) westerns are extremely popular.  This is definitely a case of being the right person, in the right place, and the right time.  Smith has a knack for the job and it appears that he manages to work quite consistently and on some of the biggest named westerns of the era (though he did turn down a job on Butch Cassidy and the Sundance Kid to work on a different film).  He even seems to have been a founding member of the first stuntman’s union (though I’m honestly not too clear on his role here, but I am clear that it is a necessary union).

It is ALL quite a delightful read, but I want to be clear again that it isn’t so much a biography.  While we learn that Dean was fast, very fast, and that he won a lot of races, more than a few of them we’re told about, we don’t really know anything about his training or his daily regimen or how he prepared for the Olympics.  We do know, though, that while competing in Los Angeles, he ran in to Frank Sinatra and Ava Gardner in the hotel elevator and that Smith thought Gardner “was one of the most beautiful women (he’d) ever seen.”

These are the sorts of anecdotes that you can expect throughout the read.  Though told mostly sequentially, Smith doesn’t delve too deeply into anything unless there’s a story that he can tell about it.  He talks about all the films he worked on, who the leading actors were, and what he thought of them.  He mentions working on a film, Blood on the Arrow, for which he would be the stunt double for Dale Robertson.  But the only thing he says about the film:

By this time in my career, I had already seen and done a lot while overcoming a lot of difficulties.  But the cholla cactus there in Arizona was the most vicious cactus I had ever run across.  Wranglers were always out there with the pliers picking the cactus needles out of the horses’ legs.

I’m not sure what this has to do with the film or the difficulties he’s overcome (honestly, I haven’t seen a whole lot of difficulties for Smith to overcome … certainly nothing out of the ordinary for an average human), but…well…it’s an anecdote he remembered and wanted to share.  Just as, when he talks about liking certain actors and why, he says of Strother Martin:

He had been a national swimmer and diver as a young man, so we got along fine.

This is a light, easy, fun read.  Many people will love to read the stories about the actors and films.  But if you can’t tell by my tone… I would have preferred more of a biography and fewer anecdotal stories.  I would have liked to have read about how he went about setting up the stunts, how much they were rehearsed (if at all), and what (if any) anxiety he had about performing the stunt, rather than how he had impressed the director and crew with his daring (hubris).

Looking for a good book?  If you want a beach read that is easy and entertaining, this is probably exactly the book you are looking for; but if you want something with a little more meat on it, you might want to keep looking.

Cowboy Stuntman: From Olympic Gold to the Silver Screen