STALKED: THE BOY WHO SAID NO: A TRUE-LIFE NOVEL – Patti Sheehy 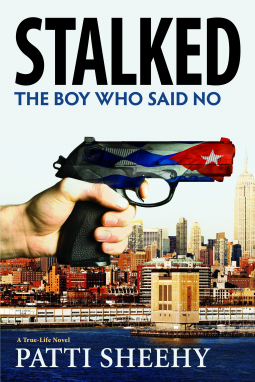 It’s been a little while since my review of The Boy Who Said No, but I had really liked that book and when I was informed that there would be a follow-up, I jumped at the chance to read it and made sure there would be room in my week of biography reviews for it!  And I can report that the follow-up book … does not live up to the predecessor.

First, a reminder that this is a novelized biography.  Taking what we presume to be fact from Frank Mederos’ life, author Patti Sheehy weaves a tale more like an espionage thriller than a biography.  There are multiple times when the story isn’t even on Frank, but rather back in Cuba, from where he escaped in the previous book.  This novelized biography idea is new to me, but it worked very well the first time around so I was game for giving it another shot.

The problem with this book is not the format in which it is written… the problem is the subject.  Part of what made the first book so compelling was Mederos’ drive.  He had a clear, focussed goal and despite an army (literally) standing in his way, he was determined to overcome every obstacle in order to get away from Cuba and in to the arms of his girlfriend.  This was the motivating action throughout the entire first book, and Sheehy heightened the tension with her taught writing.  But in this book, Mederos has already found the freedom he was searching for and is quickly married to the girlfriend who was his guiding force to freedom.  So what motivates him?  Nothing out of the ordinary, really.  He wants to live the American dream … and does.

Mederos’ drive in this book is to live in peace.  It is the peace that is shattered — by his friend who leads him in to riot territory, then by the death of someone very close to him, and then by men, loyal to Cuba, who are looking to kill Frank Mederos.

It’s a nice idea, but a goal of living in peace is hardly an active, exciting challenge.  Certainly not when compared to trying to avoid an entire military and escape an island! It’s a wonderful goal, but it’s the same as mine … to live the American Dream without disruption.  Sheehy does everything she can to liven it up, but ultimately, the book is about a man living in New Jersey.

The book definitely picks up when we are back in Cuba with Pino, Frank’s former military commander and the man who took the heat for Mederos’ escape, but also with Lazo, Frank’s former Special Ops fellow soldier who knew of Frank’s plans to escape.  Lazo’s contributions to the book are mighty and provide the spark that is otherwise missing.  Unfortunately, it’s not nearly enough.

The book is titled “Stalk” and I think it’s safe to assume, especially with Pino’s early inclusion in the book, that we are going to see Frank being menaced … stalked … by the Cuban Special Forces, or by Pino at the very least.  We do, and it’s easily the best and most exciting part of the book, but it only comes about the last 62 pages of this 310 page book.  That’s right…we have 248 pages of Frank living the American Dream and Pino plotting revenge.  There are moments that overcome the tedium of this… Frank’s wandering blindly in to a riot zone, for instance … but mostly we lack excitement.  It’s the biography, without the interesting novelizing.

In the first book, Frank was driven by his desire to be with Magda, his girlfriend.  It felt as though anytime he was on the verge of giving up, thoughts of Magda kept him going.  Here again, we have nothing, it seems, driving Frank.  He meets up with and marries Magda.  They have a child.  Magda gets sick and dies.  All within a relatively short passage of time.  Magda’s illness and death feel dragged out, to draw on some sympathies, but already in this book there’s less spark between them than there was when they weren’t even together.

Note:  there’s a sex scene in here that is pulled out of the steamier romance novels and just really feels out of place.  It’s beautiful that Frank and Magda get to live their dream and get married, but why is it necessary to describe, in detail, their sexual congress?

The best parts of this book don’t really involve Frank.  The best parts are back in Cuba, with Pino, with Lazo, with Damian.  And then in the United States, with these same people.  It is interesting to note, that while Frank struggled for years, trying to get away from Cuba, Lazo arrives to protect Frank, with no trouble (“Lazo arrived in Key West the next day, exhausted…. he had tossed and turned the night before…” — we never learn HOW Lazo managed to get away from Cuba!), and Damian and his ‘handler’ arrive in the United States to stalk Frank.  How is it so easy?  Recognizing that time has passed (more than thirteen years), we don’t know if it’s just that much easier to flee/leave Cuba now, or if their insider help makes all the difference.

I was very excited and eager to read this, but it definitely didn’t hold the magic that was in the first book.

Looking for a good book?  Stalked: The Boy Who Said No tries to recreate the adventure and excitement of the first book in the biography/novel series but ultimately Frank Mederos’ life in America lacks the danger and excitement that he had when, as a Special Forces soldier, he was trying to flee Cuba.

Stalked: The Boy Who Said No: A True-Life Novel