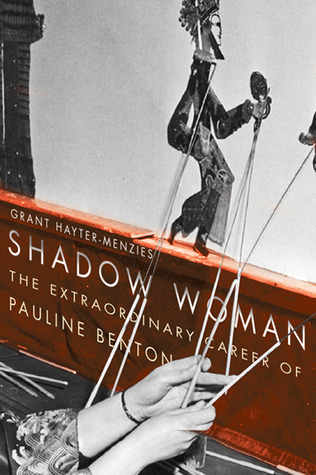 I knew nothing about Pauline Benton before reading this, but I’ve always had a fascination for puppetry of all sorts, so I thought that a biography of a puppeteer or puppet-master might be interesting.  It is!

Author Grant Hayter-Menzies clearly has a deep appreciation for Benton’s work and has done extensive research on Ms. Benton and the Red Gate Shadow Theatre puppetry company that Benton founded and toured with.  He beautifully weaves in Benton’s history, along with shadow puppetry history as if the two were not independent of one another (and perhaps they are not).

Benton developed an interest in the shadow puppets at a relatively young age.  Though there’s no concrete evidence of when this happened, Hayter-Menzies makes some educated guesses based on some known facts, and it rings true.

Even throughout the book, in which Hayter-Menzies is clearly impressed with Benton, Pauline comes off as rather unremarkable.  Quiet, but passionate about the art of shadow puppets, we never get the impression that she’s particularly forceful, but rather understated.  And yet she almost single-handedly preserved the art of shadow puppets when the Chinese Culture Revolution was seeing a loss of much Chinese art; she performed at the White House; and there’s perhaps not enough credit given (though it is noted) that not only was she not Chinese or even of any Asian heritage, preserving and performing a Chinese art form… she was a woman doing this.

Part of the reason that even this is understated is that we get no peek at her sexuality.  We do not know if she had any personal or physical relationships.  Her life truly did seem to be about her puppets.  Her life was so completely devoted to this puppet art form that Hayter-Menzies mentions in a footnote that he could find no evidence of any outside income for Benton and suggested that the income from Red Gate Shadow Theatre would hardly be sufficient and likely had inherited a healthy income when her parents passed away.

Although the book is titled Shadow Woman, suggesting that it is about Pauline Benton, it does go beyond Benton as Grant Hayter-Menzies gives us a little glimpse of what happened to Benton’s puppets and stages upon her death in 1974.  She had sold or donated a number of her pieces to museums in the 1960’s and had saved some of the more valuable for herself.  Those were given to friend and colleague Mercina Karam (who was with Benton when she died) and from there they’ve moved on to others who would appreciate them for both their beauty and functionality.

Hayter-Menzies concludes the book with an appendix of the five episodes for one of Benton’s favorite plays, “The White Snake,” which Benton translated in to English herself.  This script could be worth the price of the book itself.  It has all the classic Chinese story-telling ingredients, including a beautiful, poetic language.

While this was interesting to me because of my interest in theatre and puppetry, I think that anyone interested in reading biographies or looking to learn something new might find this of interest as well.

Looking for a good book?  The story of Pauline Benton and Chinese shadow puppet theatre, Shadow Woman, is a fascinating read, well told by Grant Hayter-Menzies.