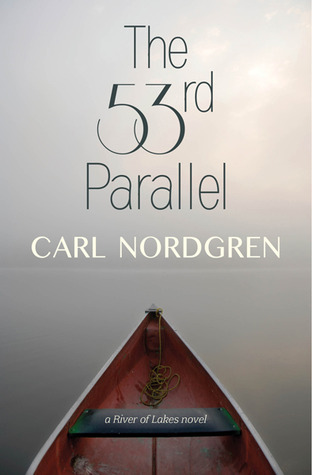 What do the Ojibway of Ontario, Canada and Irish IRA militants have in common?  For one thing, they both reside along the 53rd parallel latitude.  But Author Carl Nordgren brings them together in other ways in his River of Lakes series, book one: The 53rd Parallel.

In this book, Brian Burke has to leave his Irish village.  His partner, Maureen O’Toole, is running from her past with the IRA and an experience she’s had in Germany.  They flee to Ontario, where a Ojibway clan, guided by Joe Loon, keeps a watchful eye on them.  Both parties look to maintain a simple way of life and to ward off the modern world, and Joe Loon and the Ojibway sense that Brian and Maureen are connected to the water and were brought to help protect the river.

I was hooked with the opening lines:

With so much light absorbed in the full rolling clouds of fog floating over the River’s lake and shrouding the fir and birch forests it seemed like dusk all day. At the far end of the lake, where the current collected its force to return to the River’s channel, some of the clouds were smoke.

Nordgren’s writing is smooth and poetic.   At times, this actually becomes a distraction as content makes way for style.  The patient, lyrical prose was perfect for the scenes with the Ojibway, reflecting the way in which they lived within the world.  But that same smooth-flowing prose fails to capture the passion and energy of a life in the IRA.  This is not a call for a novel full of action, but I never connected with Maureen or Brian, and I think it’s because I never really understood why they were headed to Ontario.  Despite the depth of their background we get on these two, they never feel like real people, not in the sense that Joe Loon and Matthew Loon felt like real people.

There’s a great deal of set-up within this novel.  We follow two very different sets of lives (Ojibway and Irish) that intersect, and it’s this set-up that takes up a greater part of the book.  Getting to know the people and the customs, and finally how they relate to one another.  But by this time, the book comes to its end.

This is the first in the series, and because I enjoyed the poetic-prose style and now I know the people, I am hoping that we’ll get more story in the next book(s).

Looking for a good book?  Lyrical and touching, The 53rd Parallel brings together two very different cultures, both looking to preserve a sacred way of life.