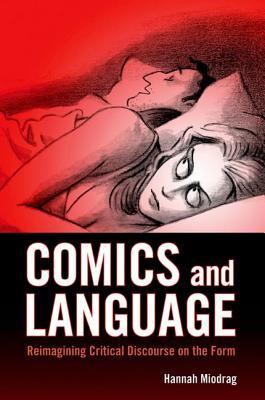 I enjoy scholarly studies on topics that I am interested in.  But I believe it is a fallacy to think that just because something is ‘scholarly’ it has to be written in a dry, emotionless, passionless manner.  Hannah Miodrag could learn from her subjects.  Language in comics is brief and to the point.  To clutter up the space that is shared with images is wasteful.  To be concise and precise is preferred over excess verbiage.  This reads, not even like a scholarly study so much as a thesis paper trying to impress old academics who look down upon comics.

Although the title of this book is Comics and Language, this is, as the sub-title refers, a discourse on critical writings about comics.  A discourse on comic book criticism.  A hot topic to be sure (and if this were a comic book, that last sentence would be in a word balloon with dripping sides, indicating sarcasm).

Early on, Miodrag puts forth her contention that:

Critics have tended to overreact to perceived slights against the medium, often at the expense of responding analytically to the exigencies of the corpus itself. *

I have to admit that I am not intimately familiar with comics scholarship or criticism, other than the oft-referred to Scott McCloud’s Understanding Comics and Reinventing Comics, so I must accept Hannah Miodrag’s premise that there is an over-reaction to perceived slights.  But I am already confused…are critics defending the comic book medium (they are responding analytically to the perceived slights) or are they, as critics creating the slights by responding analytically?  The former, I think… but let’s move on….

In writing a little more specifically on language, Miodrag writes:

I disagree.  While I understand and accept her points to this argument, I think that language/speakers do NOT always reuse pre-existent signs.  New words/signs are brought forth quite regularly whereas our visual signification remains somewhat static.  One common means to this is by mis-using a word, creating a new meaning for the word in use.  Miodrag notes this herself just a few pages later when she discusses the “verbal eccentricities” of a character in a comic by Lynda Barry.

However, I digress.  My job here isn’t to agree or disagree with Hannah Miodrag, but to review her work.  To that end, this book proves disappointing.

Unnecessary verbiage is still the key.  Miodrag spends a fair amount of time discussing Will Eisner.  Eisner, for those who aren’t already familiar, was a ground-breaking cartoonist who invented, and re-invented the comic form, experimenting with styles and characters.  Miodrag picks his work apart (“When Eisner really lets rip, however, the awkward grandiloquence of his extended bursts of prose veer towards the embarrassing…”*) until finally concluding: “To subject his sentences to linguistic analysis takes them out of context, for adroit prose is really not the point of Eisner’s work.”*  So why did we just spend time discussing it?

From Eisner, Miodrag moves to Alan Moore, a writer/creator most noted for the Watchmen series that was quite the rage in the 1990’s.  Here, Miodrag notes:

“But to cite Moore as one of the comics form’s best writers reveals the disinclination, within comics criticism, to tease out the difference between great comics and great language-in-comics.” * (The emphasis is mine.)

While Miodrag cites a critical essay that refers to Moore as a “wizard at formalist exercises” to conclude her point, I’m not convinced that one or two essayists constitutes the wider range of “comics criticism” to which she regularly refers.  And while it seems that Miodrag herself is critical of the literary merit of comics, she does say:

“Comics are not, of course, reducible to literature.  They are a visualverbal (sic) form, and layouts, pictures, other visual devices, and plotting might justifiably take precedence over a well-crafted sentence.  Language is just one of the form’s elements, and may not be at the core of a particular text’s aesthetic.”*

So…tell me again why we just spent one-quarter of the book discussing the language in comics?

I could only laugh as Miodrag concludes Chapter Three with:

“Critics agree that the visual is vital to comics, but in acknowledging this we must not overlook the potential centrality of text—of material, graphic, spaced-out words—in shaping these visual works as much and potentially more than do iconic pictures.”*

Critics agree that the visual is vital to comics?!  Whew…I am relieved.  But…there’s a “but?”

The book drags on.  There is a short discourse on whether or not single-panel cartoons should be considered as comics, just as strips and serialized comic books and graphic novels.  Not surprisingly, Miodrag thinks that they should, whereas Scott McCloud (whom she clearly doesn’t seem to care for) thinks that they should not.  This, perhaps, is the crux of comic book criticism?

It strikes me that, in an attempt to be ‘scholarly,’ this book is profuse with verbiage.  I read the following sentence aloud to my wife when she foolishly asked what I was reading.

“All narrative forms can, analeptically or proleptically, override their diegetic sequencing, but as we have seen, only comics can potentially override textual progression.”*

Miodrag defends her own writing as she concludes the book with:

“While it is something of an exaggeration to suggest that there is still a “dearth” of serious comics criticism, it is true that the theoretically sophisticated criticism that exists is too rarely distinguished from the theoretically inadequate, and this remains a particular problem for formalist conceptions. … As comics criticism continues to strengthen its presence within the academy, it becomes ever more urgent that this kind of properly thoughtful scholarly criticism becomes the norm, not the exception, for if the seriousness of the field really does need defending, this can be the only viable strategy.”

It makes me wonder if the medium really does need scholarly criticism.  Certainly, I would argue, it does not need this particular style to become the norm.

Looking for a good book?  A thesis review committee may enjoy this critical discourse on comic book criticism, but for the book-buying public — be aware that this is a dry, passion-less look at criticism of comics.

*Please note:  All quotes are from an Advanced Reading Copy.  Language may have been altered or removed before final publication.

Comics and Language: Reimagining Critical Discourse on the Form