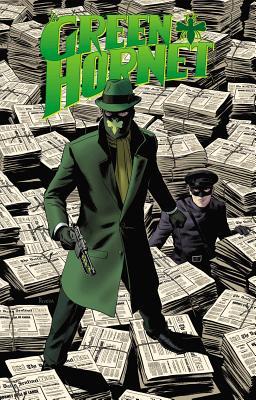 The Green Hornet has been mostly absent in my life since I was maybe eight years old and making Green Hornet rings and plastic hornets with my classic (then new) Mattel™ Goop Thingmaker® (as seen here), which was one of my most favorite toys back in the 1960’s!

Here, author Mark Waid tries to put a new twist on an old character, making him more human, if that’s possible — he’s not a super-human or super-hero.  He’s a vigilante.  He works to ingratiate himself with the underworld by appearing to be one of them … a criminal.  He does this with violence and threats, using the very means of the criminals themselves.  So how does this separate him from the criminal underworld?  Therein lies the question that Mark Waid uses to build his plot.

The Hornet is trying to find a mad bomber who has threatened the city.  The Hornet uses strong-arm tactics that put him on the same level as the criminal underworld.  This action creates rifts within his own world, the most severe of which is with his trusty servant/partner Kato.  Most of this story is psychological as it follows Britt Reid’s descent in to becoming just what he’s fought against, risking his personal life and fortune as he becomes singularly focussed, and then his attempts to rise above the filth of the underworld.

Waid does this well and manages to build some suspense but over-all the plot seems quite re-hashed.  The attempt to make our heroes (and superheroes) relatable and as human as possible, we tend to see them descend in to the world they fight against.  It’s a version of the Stockholm Syndrome, identifying and bonding with “one person (who) intermittently harasses, beats, threatens, abuses, or intimidates the other.”  Is there a comic book character who hasn’t gone through this is the last couple of decades?  It just doesn’t feel real any more.  And Kato’s ‘leaving’ never, ever felt like it was the end of the line for The Green Hornet or Britt Reid.    Instead it felt like “stay tuned next month to see how they get back together!”

Waid’s use of Citizen Cane as inspiration is wonderful.  More so that he admits to it.  If the book didn’t have Waid’s strong hand writing it, this would have never survived the storyline.

The artwork is fine.  Daniel Indro’s contribution is slightly stronger than Ronilson Freire’s.  Indro’s is a bit more three-dimensional and realistic, while Freire’s seems flat by comparison.  Both manage to capture a gritty, violent world.

Looking for a good book?  Mark Wiad’s The Green Hornet Volume 1 brings our 1940’s crime-fighter in to the spotlight, but mostly for his criminal activities.  It’s not a bad read, but isn’t a book that is easy to recommend either.