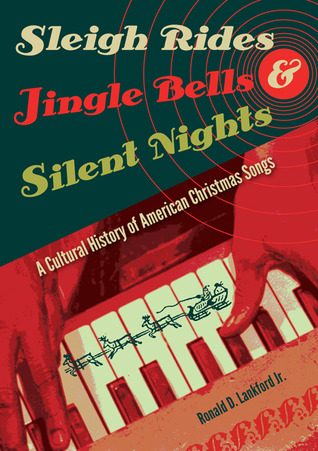 What is the quickest way to take the joy out of the joyous atmosphere of most Christmas music?  Answer: write an acedemic treatise on the subject.  To be fair, the subtitle of this book is called “A Cultural History of American Christmas Song” and author Lankford sets us up early with comments such as:

“As a reflection of American values and desires, the Christmas song is both multifaceted and endlessly conflicted”

This sounds like it will be a fun ride, doesn’t it?

This book mostly avoids the Christmas carol, or the religious songs, and focusses on the secular songs instead.  However, the title of this book is quite misleading.  The songs “Sleigh Ride” and “Jingle Bells” and “Silent Night” are hardly mentioned, while other songs are researched and analyzed in depth.  Lankford has even spent a few pages discussing a song called “Christmas Balls” by Ben Light and his Surf Club Boys.  This was the only song in the book with which I was unfamiliar, so I looked it up — it’s a pretty rare item.  Not exactly what one would consider a common Christmas song…even as a novelty song!

Despite the clear academic aspect of this book, I found the first two chapters quite interesting.  Knowing more of the history of some of our popular songs, as well as the culture of the times that produced the works was interesting, and in some cases eye-opening.  But as the book progressed, I became irritated with the author’s ‘insight.’ Beginning with the chapter on ‘carnival’ I sensed Lankford was reading in to some of the songs much more sexual congress and innuendo than was necessary.  Or, in other cases…so what?!  Lankford writes pages on “Winter Wonderland” and spends a great deal of time focused on the opening verse, which is commonly removed.  Five pages on this song, the removed verse, the added children’s version, only to sum it up with: “Romance, however, stubbornly persisted, claiming its corner in the holiday celebration.”  I didn’t need to read five pages to get to this.  I could have just listened to the song!

Another five pages analyzes “Let It Snow, Let It Snow, Let It Snow.”  Here, Lankford asks, “The song never answers whether the couple has purposely gone out into the storm or whether the snow has caught them by surprise. One of the two has brought popcorn, so the meeting does seem to have been planned. But where are they?”  Is it really important to know this?  How does this tie in to the culutral history of America?  He goes on to write “Despite this emphasis on physical sensation and sensuality, “Let It Snow” seemed to fit well within the growing Christmas canon” and then “This conservative reading of “Let It Snow,” however, is only one interpretation, and not necessarily how the song would have been read in 1945.”  But isn’t that the point of this book?  To look at how the song was influenced by and then influenced the culture of the time?  Does analyzing it this way further the point of the book?  We end the look at the song with the suggestion that Vaughn Monroe’s and Dean Martin’s interpretations of the song “assured a less innocent rendering of the song.”

From ‘carnival’ we move to the blues and the depressing nature of Christmas songs, and then to satire and the novelty songs (I never expected “Grandma Got Run Over By a Reindeer” to have been studied so thoroughly)!  I would also admit surprise at how much the movie Gremlins figures in to this section of the book.  This has never struck me as a ‘holiday’ icon.  Yet there is no mention of “Home Alone” that I recall.  But this started me thinking that this (Gremlins) was how Lankford actually views the holiday season.  From this point on, I sense that our music and holiday traditions are nothing short of being Gremlin-like to Lankford.  Cute, cuddly, and furry on the outside, but nasty and razor sharp when you get a more intense look at them.

In the next chapter, “The New Nostalgia,” we get some harsh words toward the Christmas culutre.  He writes:

The influx of consumer culture and the strain it placed on the American family was deepened by a simple fact: Americans wanted to believe they could have it both ways.  They wanted to believe they could step into—and back out of—consumer culture as it suited them; that there were good and bad forms of consumerism; that they could retain influence over children while filling the home with consumer goods; and that a group of people under the same roof could consume as individuals and still come together—especially at Christmas—as a family. Far from questioning these assumptions, the modern American holiday song supported these myths with few reservations. The delusion was so complete that even the Christmas song seemed unaware of itself as a commercial product.

The “delusion?”  This is how we end this study…with Lankford suggesting that our Christmas songs are a failure because we as Americans are failures…we want traditional values as reflected in the nostalgia of the songs, but that the songs haven’t kept up with the culture and that the song writers have been “unwilling” to show us these contradictions in song.  But this isn’t a failure, it’s just part of the zeitgeist…we want it both ways and we don’t want to be told we can’t have it.  Leave us alone to enjoy our Christmas songs and go take a look at how Rap is often closely identified with Shakespeare  instead, why don’t you?

Looking for a good book?  This is probably only going to be found in very specific university classes.