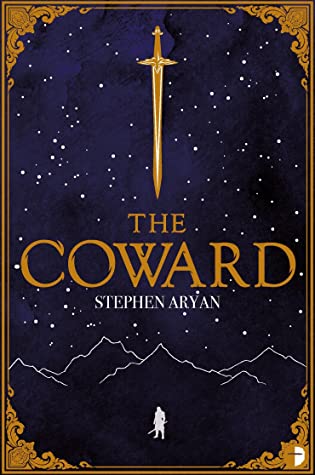 Kell Kressia is a living legend.  A hero about whom tales are told. This stems from an incident when Kell joined a band of rugged warriors to slay the Ice Lich. The Ice Lich was killed, thereby saving the world, according to legend, but Kell was the only human to return.  Since then, he’s tried to maintain a low profile, embarrassed by any fawning attention, and prefers to work the fields as a farmer.

But a new terror has come to light.  Up north, taking residence in the Ice Lich’s lair, is something possibly far worse than the Ice Lich.  The frozen land is spreading south and the clans of the area are calling for men to gather and save the region once again, and the man they want to lead them is the legend himself, Kell Kressia.

What Kell has never told anyone, is that he is no hero.  He was lucky the first time and in truth, he’s a coward who wants only to be left alone.

So… this is a ‘reluctant hero’ story, taken to the extreme.  Not just reluctant, but a coward.  Such an extreme that the book is titled for him …. The Coward. He’s a coward.  Coward, coward, coward.  The word is there to make sure you know … Kell is a coward.

Except, well, he’s not.  Something happened once and he got lucky and now he doesn’t want to have to go through that again.  That makes him a coward?  No.  He’s a reluctant hero, and reluctant heroes are a dime a dozen in fantasy these days, so of course the author (and publisher?) are trying to make him stand out by being different.  But again, he’s not.  He’s not different. And that’s one of the biggest problems with the book – there’s nothing about Kell or any of the other characters to make them stand out or rise above all the other reluctant heroes on the bookshelves.

The Reverend Mother Britak is memorable (in a good way) but terribly under-utilized and disappears quite suddenly from the book.  (I would suspect she’ll make more of an appearance in the second volume of this duology, but I won’t be reading it myself.)

One of the other problems with the book is that nothing unique happens. There is one storyline, centered around Kell being a coward and even if you can accept the idea that he’s less coward and more ‘reluctant hero’ – well, what happens to reluctant heroes?  They eventually follow through and take on the mantle of hero that everyone hopes or expects of them. Just exactly the way it happens here. There’s no surprise.  No thrill.  From the moment we learn he’s a coward (reading the title of the book) we can pretty much assume he’s going to turn out to be the hero, and yup… there it is.

A fantasy actually about a coward (someone who avoids the danger at all costs but somehow, accidentally manages to save the day) would have been vastly more interesting than this book. I was bored.  I lost interest in the characters (and it seems the author may have as well because many of them just pass right through for no reason, never to be seen again). And for a book as straight-forward as this one, it was a long, forceful read.

Since writing this, I’ve seen both the author and some of the other reviewers compare this book (and/or the author’s writing style) with David Gemmell. I’ve never read Gemmell (and now probably never will) but if you’re a fan, perhaps this will appeal to you.

Looking for a good book? Stephen Aryan’s The Coward is a singular-focused story of a reluctant hero who gives us no reason to want to see him achieve something.