THE CONSEQUENCES OF FEAR – Jacqueline Winspear 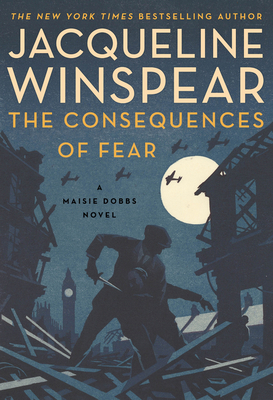 Freddie Hackett is a message runner for a government office in London in 1941. The job is not without its dangers given the German bombings, but what Freddie didn’t expect was to see was an argument ending in murder down at the docks. An air raid delays Freddie, but when he gets to the delivery address he comes face to face with the killer.

Freddie goes to the police but they don’t take him too seriously (there’s no body found in the location) so Freddie seeks out a woman he met once when delivering a message … Maisie Dobbs. Maisie believes the boy but has to tread carefully as she’s currently working, secretly, for a special government agency to assess potential recruits for the French Resistance.
Maisie’s worlds collide when she spots the killer amidst a power struggle between British Intelligence and French agents.
This is the 16th book in the Maisie Dobbs series, but it’s the first one I’ve read.  My wife is a fan of the series and has read them all and has encouraged me to read some, so when this ARC became available I was eager to read this.

First, I really appreciate a series that isn’t greatly dependent on the reader having to have read the early books in the series. I never felt as though I was missing key information about the characters or their relationships. It’s clear that Maisie has a history but i never felt that I needed to know something from her past to understand what was happening in the present. Anything I needed to know was brought to light.

The historical aspects here are quite strong and it probably goes without saying that author Jacqueline Winspear has done a great deal of research to be able to present this historical fiction.  I’m personally not real familiar with the British and the French WWII history, but I do feel that this has given me some better insight, to what it was like to be in Britain during the early days of the war.

There is a relationship between Maisie and an American diplomat, Mark Scott, which plays a key role toward the end of the book. While I never felt I missed anything, the relationship is the one area where I would like to have a little more background information, just out of curiosity.

The mystery (mysteries) are well considered and well delivered and I can see why this series has lasted so long and been so popular.  I’m definitely interested in going back to read more in the series (and my wife has them all).

Because of the way that this book ends, it seems pretty clear that there are more volumes in the works, but I suspect that the next one at least will be a very different adventure for Maisie and I look forward to it.

Looking for a good book? The Consequences of Fear by Jacqueline Winspear is the 16th book in the Maisie Dobbs series. It is a powerful historical story and well-written mystery.

The Consequence of Fear