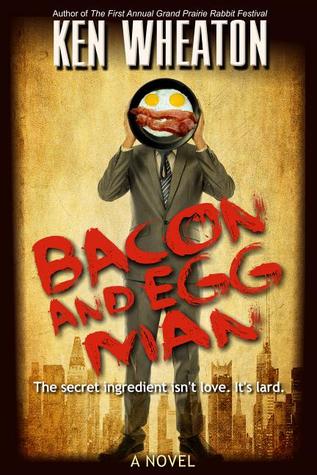 Our government is at war. With fast food.

We are in what might be best described as the future in an alternative timeline in what was once the United States of America.  The Northeast has seceded and the rest of the country is now run by “the electoral descendants of King Mike, a man who made it his mission to form a country based on good, clean living.”

And what happens when something becomes illegal? There becomes a black market for those things. Wes Montgomery is a journalist at the last actual paper newspaper in the union (now called the Federation). When he’s not covering the news, he’s making it, as a bacon and egg dealer on the side. He gets caught by the local constabulary but Detective Blunt has bigger fish to fry and wants to use Wes to get at the biggest illegal food dealers in the Federation.

Wes will be watched closely by Detective Hillary Halstead, who falls for his charm (and his steaks) and the two get intimately close. Together they will face the dangers of the underworld and enough gut-filling foods to film a feature-length dining scene ala Tom Jones.

I really loved the idea of this book, and the on-point pertinent satire. We’ve had leaders declare a war on drugs, a war on communism, war on immigration, war on business monopolies. How much of a stretch is it to suggest someone might declare a war on junk food – particularly in light of the fact that Americans are generally more obese than those of any other country and Americans also consume more junk food than anyone else.

Once the novelty of this idea wore off, however, the book began to sag a bit.  Wes’s slow, dry manner made it hard to keep up the energy needed to stay interested. What’s in the next chapter? More Food?  more sex?  And this is different from the other chapters how…?

This was fun, but I feel it would have been better off with tighter editing and a sharper focus toward the end.

Looking for a good book? Bacon and Egg Man by Ken Wheaton is a clever dystopian novel that follows in the footsteps of satire novels such as Catch-22, Candide, and Slaughterhouse-Five but doesn’t quite live up to these literary giants.