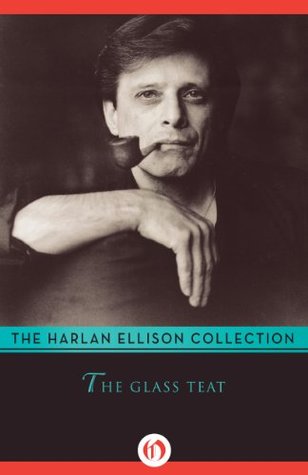 As a teenager I was completely and utterly enthralled with Harlan Ellison and his writing. I’ve read everything he wrote that i could get my hands on.  I met him at book signings and conventions and easily rated him as my favorite author.

Ellison’s anger and angst and pomposity was fun, or at least identifiable for the teen me. And over the past few years I’ve purchased his entire catalog of available works in digital format so that I can read them again.  This is perhaps an unusual place to start, this collection of essays since it was his fiction that first attracted me, but in many ways it was my reading The Glass Teat that first got me interested in reviewing.  Long before I started this book review blog (which I’ve been doing for eight years now!) I’ve been a reviewer of art shows for a local paper, a reviewer of books for West Coast Review of Books magazine, and a reviewer of live theatre for a Los Angeles newspaper, and I can pretty much trace it back to my having read this book.

The Glass Teat is a collection of essays and reviews from Ellison’s column of the same name in a Los Angeles newspaper where he reviewed and mostly disparaged the current slate of television shows (current from the late 1960’s to mid 1970’s mind you).

A few things struck me on this reading.

1) This doesn’t stand the test of time too well.  The programs he talks about are now fifty years old.  Do we really care that in 1968 Ellison thought that:

Not only are the shows out of date, but the idioms Ellison uses so frequently are also out of date.  Ellison wrote to the people, here and now, of his time.  He spoke to them as if he were one of them (he’d take issue with my “as if”) but 50 years later, we are not one of ‘them’ (even if we were back then).

2) I was a little surprised at how often Ellison’s supposed television review column devolved into rants.  Rants about the television industry were probably in line with the topic of the column.  Rants about how he was treated by other industry insiders was marginally in line with the column theme. Rants about politics, “the Man,” and ‘square’ school administrators who don’t approve of his language and aggression when visiting high schools seemed a bit outside the parameters of a television review column.  But it’s Harlan Ellison.  He pretty much did whatever he wanted and if he got shut down for not playing by the rules, it would just give him something more to rant about.

3) And my last impression here was noticing just how egotistical Ellison was.  It’s certainly no secret he thought highly of himself, but it really comes through in these essays where he is wronged and maligned by others who don’t recognize him when he’s right.  It’s kind of made me wonder about my younger self – the one who really ‘dug’ this guy.

Despite my above comments, I generally enjoyed reading this – mostly from a nostalgic point of view. But I really look forward to re-reading Ellison’s fiction.

Looking for a good book? The Glass Teat is a collection of mostly television reviews and essays by Harlan Ellison. Those who remember television in the 60’s and 70’s may find it fun to look back on what one cantankerous writer thought of television programs of the day.