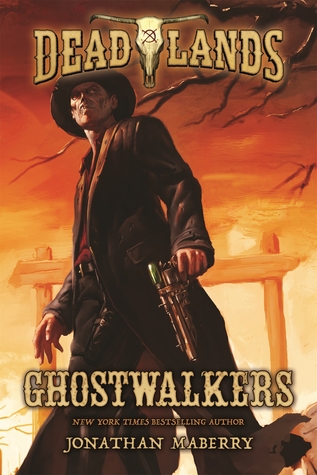 The great quake of 1868 split California into scores of labyrinthine caverns, mostly flooded with ocean water. But the quake also revealed a new substance known as “ghost rock” which creative individuals have discovered can be useful for making some inventive weapons, among other things. Ghost rock provides the source for many steampunk-like inventions.

Right out of a classic 1950’s western, our hero is a gun-for-hire, haunted by his past (quite literally in this dark fantasy), who wanders into a town that desperately needs a hero-for-hire to rescue them from a mad scientist who’s  creating an army of undead. Assisting our hero is a British-educated American Sioux because … well, why not?  It takes place in the old west so some Indigenous Peoples representation needs to happen.

This was my second attempt to read the book. It is a long, drawn-out work that doesn’t even come close to living up to the expectations, given that it’s based on an RPG game and mashes westerns with fantasy and the supernatural. This should be a slam-dunk winner for a reader like myself who loves all these genres.

First, I should admit that I am not at all familiar with the role playing game game on which this novel is based. If that’s key to enjoying this book, then I shouldn’t have bothered trying. But I don’t see anything on the cover that warns me of this. And even if this warned in bold letters that this was based on an RPG, I’d still probably have wanted to read it, based on the themes and the fact that I’ve enjoyed some RPGs.

No, the problem here is that author Jonathan Maberry goes on and on describing every little aspect in great detail. It is exhausting reading through this, and not because of the high energy action but because this fractured fantasy world is full of varied pieces with no unify story.  Okay… that’s not entirely true, but the unification is so remote and so far off in this massive book (475 pages that reads like 900) that it could just as well be non-existent.

I’ve liked Maberry’s work that I’ve read in the past.  In fact it was his name as well as the western/fantasy/zombie story that had me interested. But by the end I couldn’t help but wonder if perhaps Maberry’s worked so long in the comic/graphic novel world that he’s forgotten how to write novel-length prose.  I don’t know what his comic scripts look like, but I can imagine him going on at length to describe a scene, which gets interpreted into 4-6 panels of art so we don’t read all the description. But here there’s no artist to interpret and condense.

I wish I could have liked this because I put in a great deal of time and effort reading it, but ultimately this just doesn’t work.

Looking for a good book? You need to be really committed to wanting to read this book, and perhaps already familiar with the role playing game, to enjoy Jonathan Maberry’s Deadlands: Ghostwalkers.