INTO THE DARK – Claudia Gray 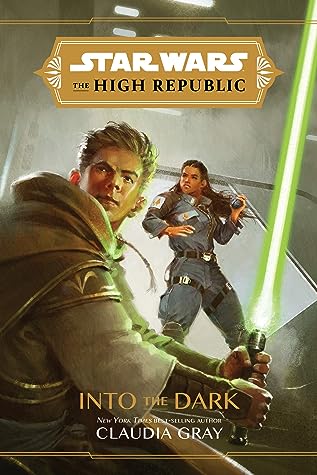 Padawan Reath Silas has a lot to learn, and he’d really prefer to stay at the Jedi temple on Coruscant to keep studying, but as a padawan, he’s at the mercy of the Jedi and they’ve determined that he has to visit an un-(or under-)developed area farther out. But the trip goes awry when a galactic-wide disaster knocks the ship out of hyperdrive and Reath and his his traveling companions seek refuge on an abandoned space station but soon find themselves in the center of some serious action. The High Republic is a glorious era, but a new enemy threatens the peace.

This middle-grade reader is an exciting foray into the ‘new’ world of the High Republic.  The book works quite well on a couple of different levels. First, it is a really nice introduction to this High Republic era. Disney is doing well to keep the franchise alive and staying current to attract new readers.

But I think this is even more successful purely as an adventure story.  Author Claudia Gray has captured the spirit of a middle-schooler quite well and although training to be a Jedi Knight, Reath feels like an ‘everyman’ character – someone young readers will connect to and identify with. His struggles aren’t just the unique challenges facing a Padawan, but often they are thoughts and worries that strike most youngsters as they transition from puberty to adulthood.  Reath is full of questions and self-doubt, but learns to trust himself (and the Force) and those he’s chosen to surround himself with.

Overall, this was a lot of fun and full of exciting adventure.  It will do well to keep interest high in the Star Wars franchise and will keep younger readers interested in checking out the local bookstores for new Star Wars titles.