NEXT TO LAST STAND – Craig Johnson 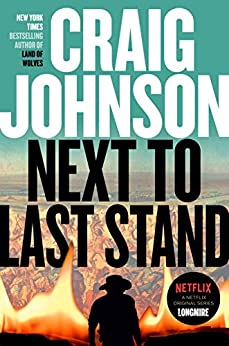 Sheriff Walt Longmire is still taking it kind of slow after his ordeal in Mexico (book #14 in the series) but as long as he’s still sheriff, he’s got some work to do. Walt pays visits periodically to the folks over at the Wyoming Home for Soldiers & Sailors, so he’s familiar with resident Charley Lee Stillwater. When Carlie passes away, Walt is surprised to discover that Charlie leaves behind a piece of original artwork that is somehow familiar, and a shoebox containing three million dollars.

The painting, Walt discovers, was a study for a larger painting … Custer’s Last Fight. The original was copied and distributed (by the millions) by a major beer producer.  The original painting however, was destroyed in a fire at the 7th Cavalry Headquarters in Fort Bliss, Texas, in 1946.  A place where Charlie Lee Stillwater happened to be stationed at the time.  Is it possible that the painting was not destroyed, after all? Could Charlie have been hanging on to it for 70+ years without letting on? Could it be worth the kind of money Charlie had in his shoebox? And most importantly, Would a painting like this be something worth killing for?

Walt’s investigation takes him on a journey through the art world and connects with the Russian mob. Meanwhile, he reflects on how much longer he wants to stay in the job, while his speed-obsessed deputy, Victoria Moretti, requisitions a new truck.

The Longmire books are like comfort food for readers.  Walt’s a comfortable, easy-going character who also happens to be tough as nails when he needs to be.  He’s very good at what he does (stop bad guys and solve mysteries) and he’s very direct with no nonsense. To counter Walt’s slow, measured demeanor we get his deputy, Victoria ‘Vic’ Moretti – a former Philadelphia detective who’s always in high gear.  This book gives a little extra attention to Ruby – the dispatcher and apparent office manager who keeps everything in order for the sheriff and deputies.

This book isn’t as intense with action as some of the previous Longmire books have been, and the addition of the Russians … in Wyoming, interested in a piece of Western American art … feels like a bit of a stretch, but Craig Johnson is a very good writer and this is still more entertaining than most fiction published in today’s market.

Looking for a good book? Next to Last Stand by Craig Johnson is the 16th book in the Walt Longmire series.  It’s a quick read and a little light on substance, but it’s entertaining and appears to be a bridge for some upcoming changes in store for the Absaroka County Sheriff’s Department.

I received a digital copy of this book from the publisher, thought Netgalley, in exchange for an honest review.

Next to Last Stand